Find out what are the best mods you can include in The Elder Scrolls V: Skyrim Special Edition. We have made a selection of mods compatible with the PC, Xbox One, and PS4 versions, although focused on the first platform. We share the download links for each mod. At the end of the article, we clarify how to download them.

Before playing or replaying Skyrim, one of the most essential mods to download is the Unofficial Skyrim Special Edition Patch. It fixes numerous bugs and objects, allowing you to enjoy a more stable version. This mod is essential to avoid many common mistakes in quests, NPCs, item placement, etc. There are some mods that don't work when this is on, but it's well worth it. 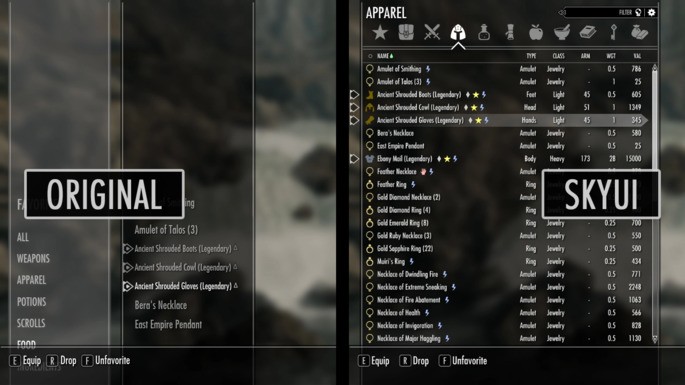 Download the mod for PC. To make it work in Skyrim Special Edition, you need to download SKSE ( Current SE version build 2.0.19 ).

SkyUI changes the interface so that it is more accessible and friendly for the PC user. You can move from menu to menu faster, sort items by category, better access favorites, and more. The default interface is somewhat slow; A mod like this is appreciated! To highlight, the SkyUI interface is compatible with both keyboard and mouse as well as a controller. 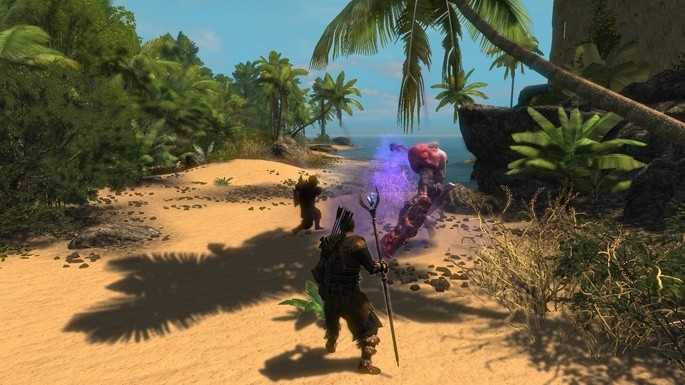 You are facing a mod that could well be considered an independent game. Enderal: Forgotten Stories offers over 100 hours of content and introduces a whole new world for you to discover. In it you will meet many interesting characters, captivating places to explore, and discover a story that will not leave you indifferent.

Enderal: Forgotten Stories also changes Skyrim to a playable level. The combat and skill system has been tweaked to offer something original. It is one more reason to experiment with this mod and discover new ways to play or evolve your character. 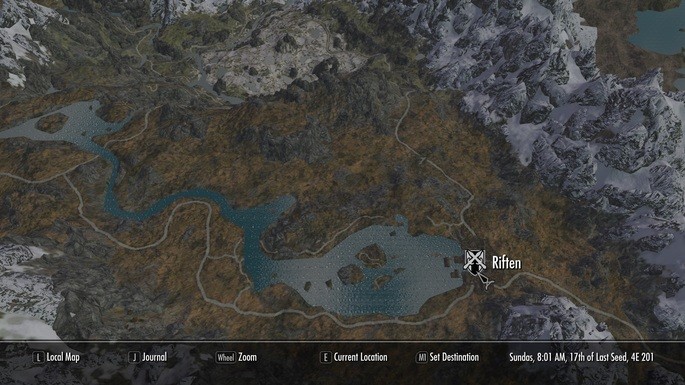 Download the mod for PC and Xbox One. There are different variants.

Skyrim's default map has a problem: several roads and highways are missing. This mod fixes this problem, showing us what the world that we can explore is really like. There are several versions, but we recommend Classic With All Roads so that you always know where there is a road nearby. A simple and effective mod! 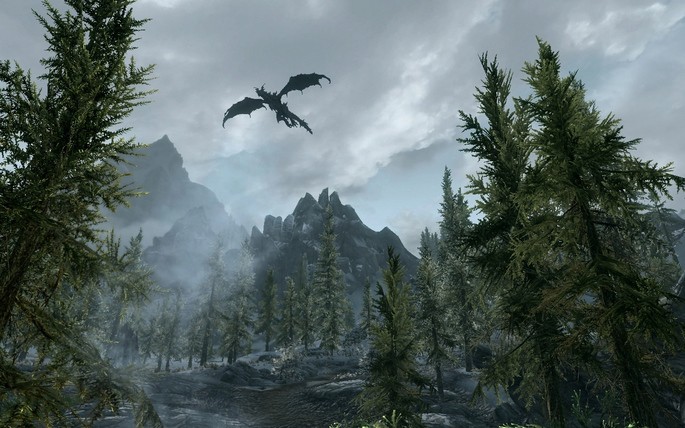 This mod is suitable for you if you have already played Skyrim and beat the game several times. Alternate Start allows you to skip the entire introductory part, and offers different contexts in which to start a new game. It is not a very big change, since the rest of the game remains the same, but it is convenient to save you a few minutes of play and change the scene. 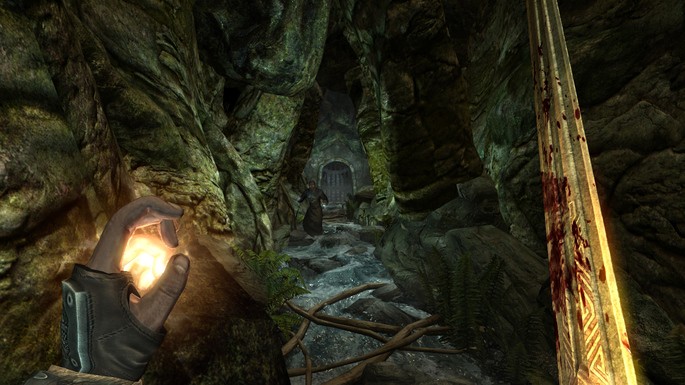 Falskaar is similar to Enderal: Forgotten Stories, as it gives us another original world to enter. It was part of a level design experiment; for that reason, you will find a wide variety of environments and dungeons. Falskaar also introduces new weapons, two spells, and a scream. The mod contains around 30 hours of content, with never-before-seen characters and exciting quests to complete. 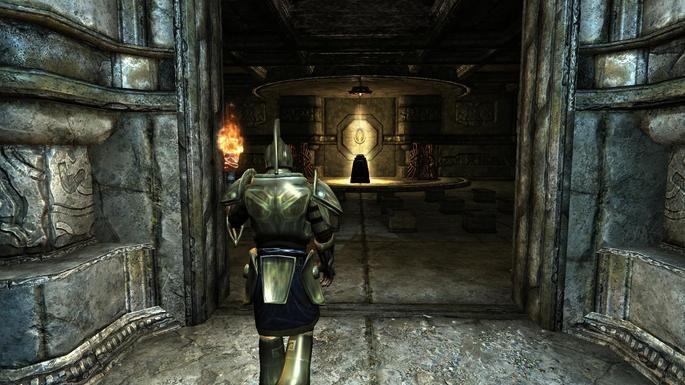 We continue with another mod that introduces a new story in a different world. The Forgotten City has received many awards for the quality it shows in all aspects. It invites you to put yourself in the shoes of a detective, and solving the mystery will require everything from you. The story is non-linear and you will even have to travel back in time to unearth the truth. The setting, music, dubbing work, everything is impeccable! 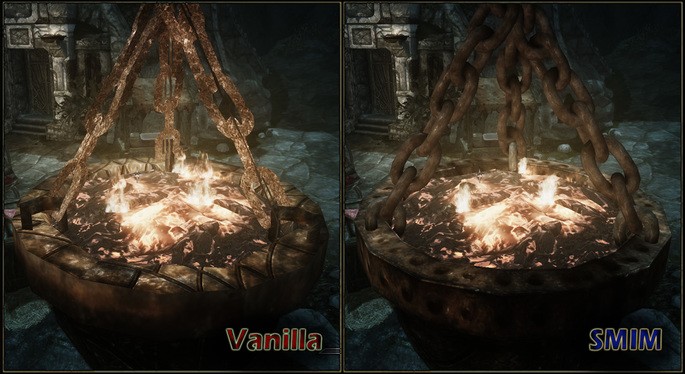 Although the Special Edition version of Skyrim improves the visual aspect, there is a clear disparity in the quality of models and textures in the objects of the game. Static Mesh Improvement Mod improves this section to a great extent. What it does is increase the traverse load or modify the models so that the objects that decorate the world look better. Among other details, it also changes many textures. It's a good facelift! 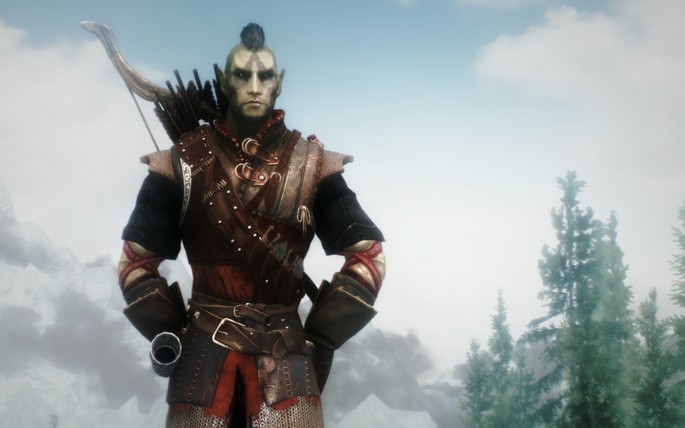 Immersive Armors is one of the most amazing mods out there when it comes to gear mods. Add hundreds of pieces of armor and equipment, always keeping it consistent with the world of Skyrim. Throughout your adventure, you will have more options to choose from to protect yourself and dress. Armor will stop being so repetitive! 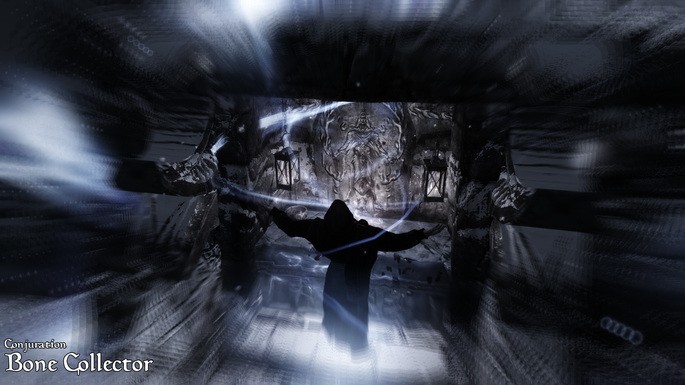 If you've already experimented with Skyrim skills but are hungry for more, Ordinator - Perks of Skyrim is the mod for you! Modify and expand all skill trees to offer new possibilities that did not exist before. With this mod, you will have a renewed experience, whatever class you like to play with. 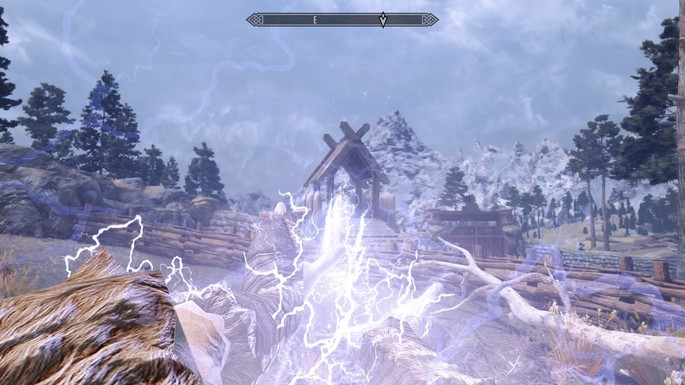 Download the mod for PC and Xbox One. For PS4, download Phenderix Magic Reloaded Part 1 and Part 2.

Do you love the magic of Skyrim? Well, don't let another day go by without trying Phenderix Magic Evolved. You will enjoy more than 170 new spells spread across different disciplines and types of magic. There is also the magic of water, wind, blood, darkness, etc. As icing on the cake, almost any creature in Skyrim can be summoned. 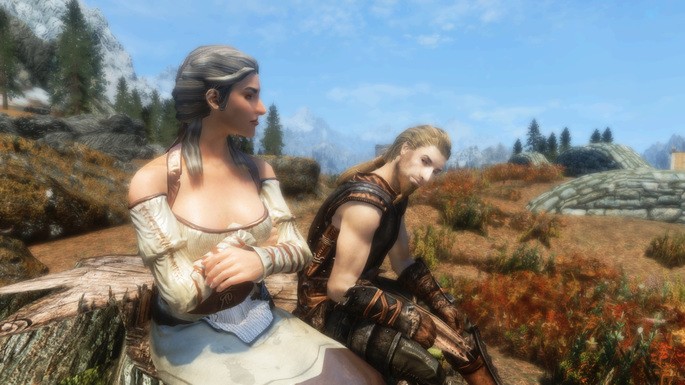 The setting and number of characters we meet in Skyrim are brilliant. Even so, we have to recognize that the NPCs feel somewhat artificial. Immersive Citizens remedy that and breathe new life into the characters that populate this game. Each one will have their routine renewed, and new interactions with other NPCs, and they will react much better in combat or in the face of danger.

In the same vein as Immersive Citizens, Realistic Conversations takes NPC realism one step further. This mod tweaks everything related to the conversations of these characters. On the one hand, they will talk to you more naturally, without so many strange pauses in between. On the other, they will react to your actions more logically and talk to each other about new topics. 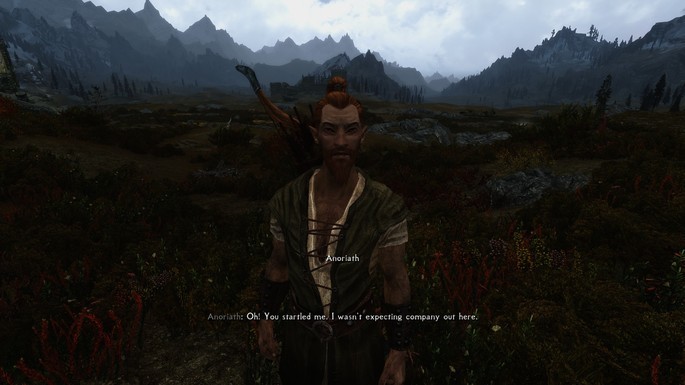 Relationship Dialogue Overhaul introduces over 5,000 new lines of dialogue. Incredible! Every character in Skyrim has something new to say, and they will be more consistent with your current situation. Your followers will be more natural and even your in-game husband or wife will act more like one. With this mod activated, no more hearing the same phrase over and over again! 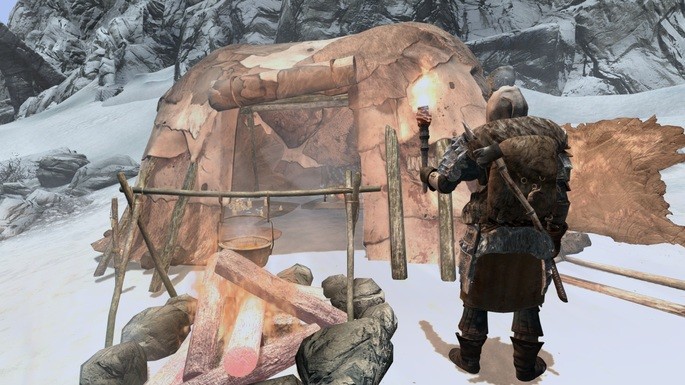 Frostfall is a survival mod that will make life in Skyrim more difficult. The cold really affects you and, therefore, you will have to dress well and seek shelter. The colder your character is, the worse his abilities will be, so keep warm! Otherwise, your character will freeze, fall unconscious, and who knows where they'll wake up. 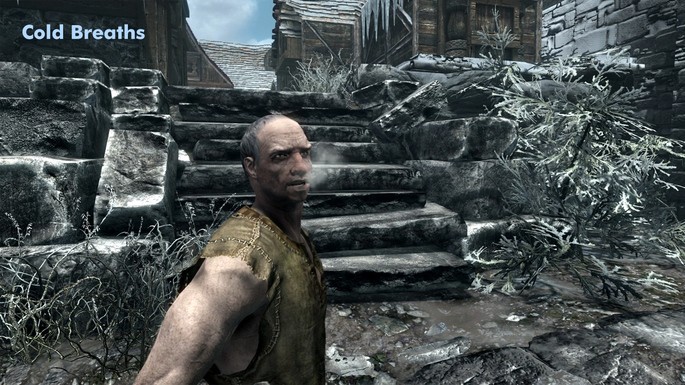 Skyrim contains a lot of cold environments but it might not give you that feeling when playing. Both Wet and Cold and Rain and Snow FX are mods that add effects such as cold breath or dripping water effects. Rain and Snow FX in particular displays frost effects on your character when you are in snowy areas. These are somewhat small changes, but they add to the immersion! 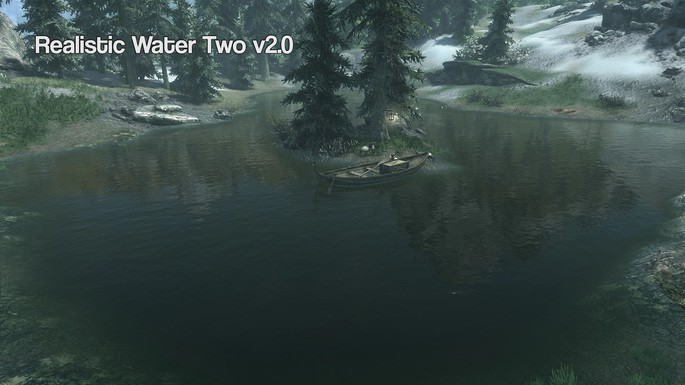 Realistic Water Two fixes and tweaks everything related to water in Skyrim. The water textures, lighting effects, and current simulation are more realistic with this mod. The waterfalls are impressive as never before! For reasons of perfecting the visual section, Realistic Water Two modifies some coasts and rock positioning. An ideal mod for those looking for greater graphic fidelity. 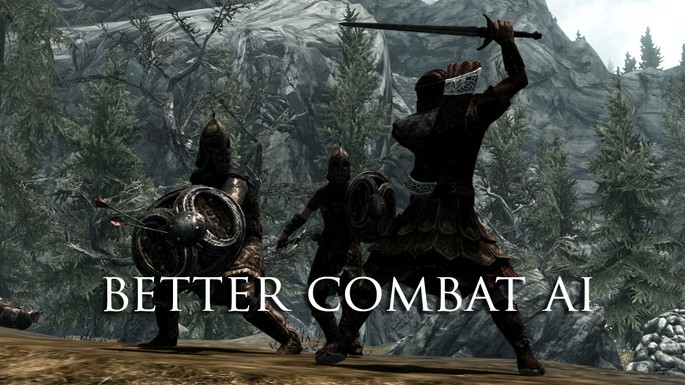 Better Combat AI modifies the behavior of NPCs in combat. With this mod, the characters are much smarter when it comes to fighting and have power levels more in line with who they are. Weak NPCs will run away, and strong ones will challenge you for sure. We recommend using this mod in a second match. You will notice the change quickly! 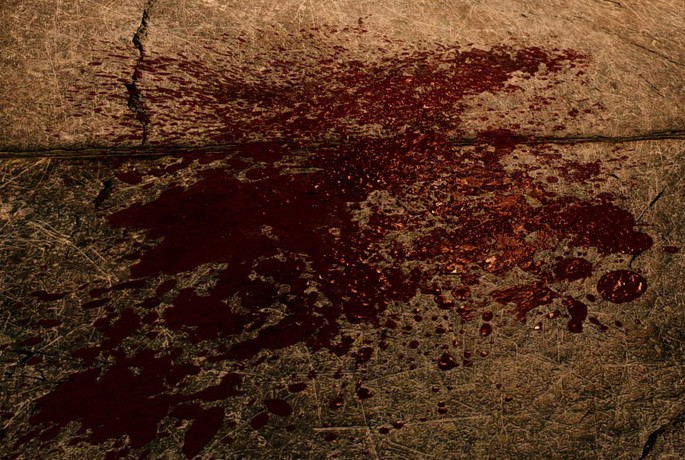 There is hardly any mystery with this mod! Enhanced Blood Textures improve blood textures and effects. It will splash better and with more quality in combat, better representing their savagery of them. There are quite a few variations on splashes, drips, and ways to release blood. Make Skyrim the bloodiest version of it! 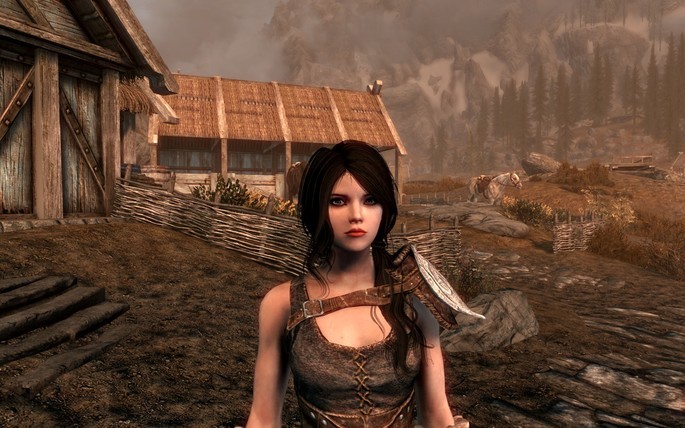 Sofia is one of the best companions you can add in Skyrim. She is fully dubbed, that is, all of her phrases are original. She is humorous, and brave, and always says what she thinks. If you have space to have one more follower, Sofia will make your trip enjoyable with her comments. Of course, she provides valuable help in combat. You won't want to let go of her! 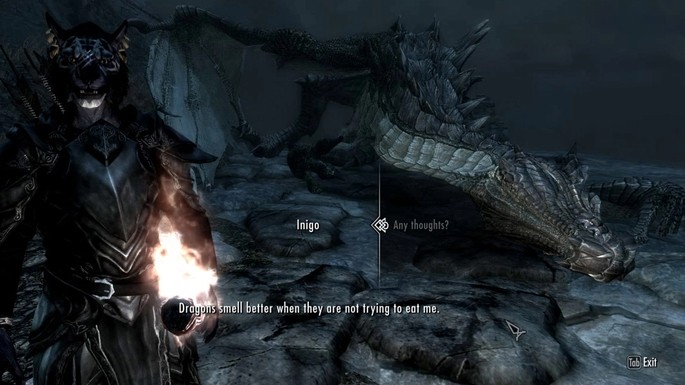 Inigo is another mod that offers something similar to Sofia. Introduces a Khajiit who, thankfully, doesn't take up any follower slots. It has over 7,000 lines of dialogue and will faithfully accompany you to the farthest reaches of Skyrim. It has comments for all kinds of situations and moments and is quite useful as a support in combat. He also has a quest related to him! 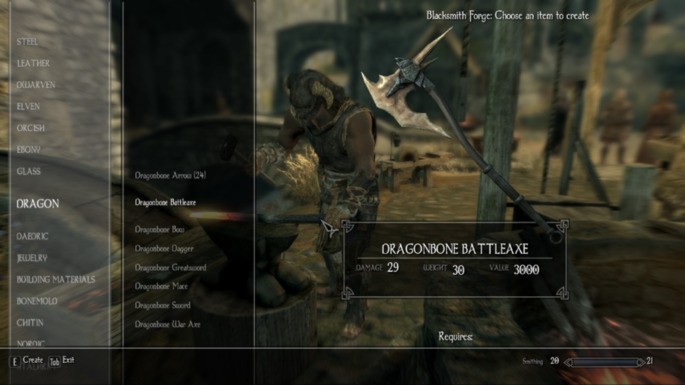 Free Crafting allows you to create whatever you want without the need for the corresponding skills or materials. Therefore, you will be able to have that coveted armor or weapon from the beginning of the game. You'll save yourself hours of leveling up and collecting materials, which is great for future games where you want to experiment with gear. 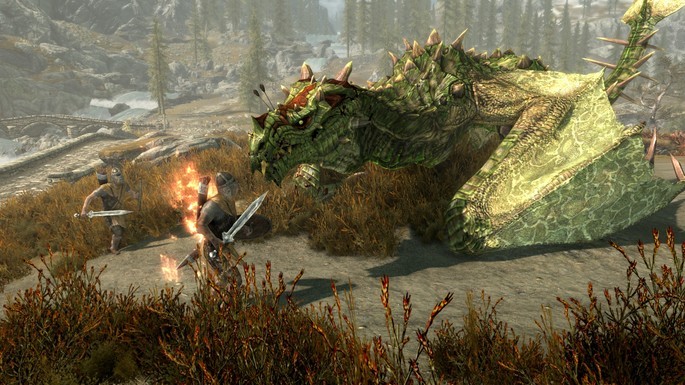 Diverse Dragon Collection is a mod that includes almost 30 new dragons of different types. These dragons have new abilities and attacks and appear occasionally as you progress through your adventure. If you love fighting dragons, this mod will add variety and challenge. Prove that you are truly dragon blood! 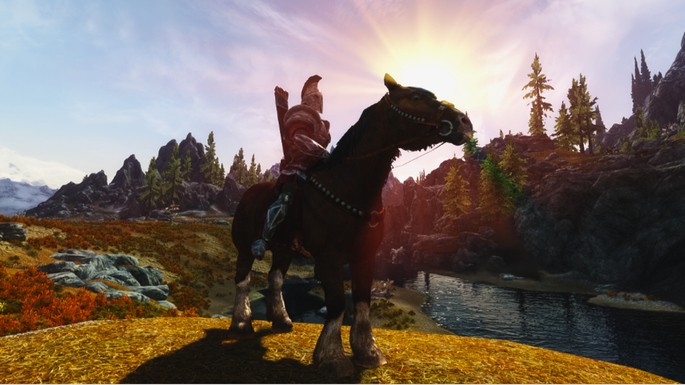 Better Horses makes the horses better than the ones in the base game. How? One of the features is that horses are now essential, so they won't die. They also gallop faster and longer without tiring. When a fight breaks out, the horses will move out of the way and let you fight in peace.

We recommend that you follow the instructions and steps indicated in each mod, as there are some that require some extra steps. Below we will tell you in general terms how you can download and install the mods.

Before you download anything, be sure to sign in to Bethesda.net with your account (or create one if you don't have one). When you're on the page for one of these mods, just hit the Add to Library button. When you launch the game on your PC or console, connect to your Bethesda account and your subscribed content will automatically download.

Nexus Mods is an exclusive mod page for PC. There are two ways to download the mods: through the Vortex app or by manual download. We recommend using Vortex for convenience in downloading and installing mods.

For Steam, you just have to press the Install button. Of course, you will need to have the Steam version of The Elder Scrolls V: Skyrim Special Edition installed on your PC, as it will not work with other versions.