On September 9, 2019, EA announced the FIFA 20 Top 100 Players list. Compared to the one that was presented last year, there are players that remain the same but others have received surprising changes.

Although he has gone through controversy, Neymar reaches a general score of 92, while Cristiano Ronaldo stays at 93. Messi, as many expected, has been chosen as the best player in this installment, with 94. And what about the rest of the players? Here we provide you with a list of the 10 best cracks for each position. How could it be otherwise, in the end, we propose a FIFA 20 Dream Team!

De Gea is no longer the most outstanding goalkeeper in this installment. Who rules this year is Oblak from Atlético de Madrid! After him, Ter Stegen continues to rise over the years and Alisson, champion of the Champions League with Liverpool, is in the third position. In the rest of the list, we have other names that were considered the best, such as Neuer, Courtois, or Keylor Navas.

Many people would have considered Sergio Ramos to be the best defender in FIFA 20. Surprisingly, that position falls into the hands of Dutchman Van Dijk, a Liverpool player. It's not for nothing that it's on the cover of the Champions Edition! Also on this list are Chiellini and Piqué, who have had a spectacular careers as defenders.

The big surprise is the presence of Koulibaly in the TOP 5, an undoubted talent in his position but that nobody expected to see.

Marcelo dropped off quite a bit in FIFA 20, considering he was leading the full-back table. Now the honor is awarded to Jordi Alba. Unfortunately, fullbacks are the worst-rated overall in the game. The proof is that Kimmich is only 86, followed by Marcelo, Alaba, Alex Sandro, and others with 85 or less. No other position has these low scores!

Kanté remains the king of the position this year, while Busquets falls slightly behind in FIFA 20 . The Brazilians Fernandinho and Casemiro occupy the third and fourth places, deserved for their good talent. To finish, Verrati, Pjanic, and Rakitić are great cracks even if they have lower scores. They earn their salary well!

If you are looking for quality midfielders, FIFA 20 will not disappoint you at all. Both De Bruyne and Modric are at the top as leaders in the table. Behind them, we have four talents who perform at a similar level: Toni Kroos, Eriksen, Pogba, and David Silva. Something curious is that, in this TOP 10, both Real Madrid and Manchester City have three representatives!

Several have been surprised to see Neymar Jr. keeping the score of 92. They thought that he would be worse in FIFA 20 but he is only behind Messi, the absolute star of the year. From behind, you can see Hazard from Real Madrid and Salah from Liverpool with 91 and 90 points, respectively. How could it be otherwise, Sterling, Dybala, and Mané are the ones fighting to enter the top five football wingers.

Cristiano Ronaldo is the striker par excellence in FIFA 20, outscoring the rest by 3. The others are on a similar level among themselves. Agüero, Suárez, and Kane have a score of 90, while Mbappé is at 89 and continues to grow. In addition, they are not the only talents, so players like Griezmann or Lewandoski are on the list on their own merits. It would be very easy to make a TOP 20 just for forwards! 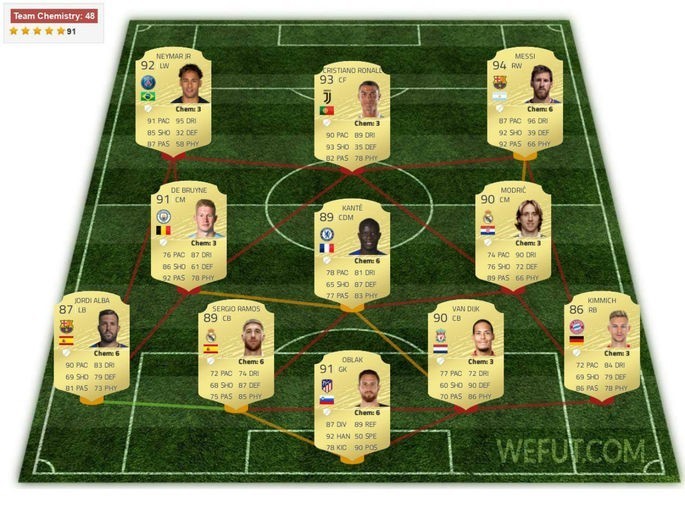 It is clear that there are numerous players who are excellent for each position. To make a Dream Team, sometimes it is enough to put the best players, but other people look for alternatives to better combine the talents. In our case, we show you what a team made up of the highest scorers from all the lists would look like.

And you? Have you thought about what your own Dream Team would be?

The best Skyrim Special Edition mods for PC, Xbox One and PS4

How to catch Ditto from Pokémon GO