1. Check the Aku Aku quests and the Quest Panel

In Crash Bandicoot: On The Run! there are missions that you can complete to get quite a lot of rewards. Take a look at the missions and keep them in mind. The first type of quests to appear in the game are the Aku Aku Quests. They are usually quite simple. In general, they ask you to do an activity or obtain a certain number of resources/items. 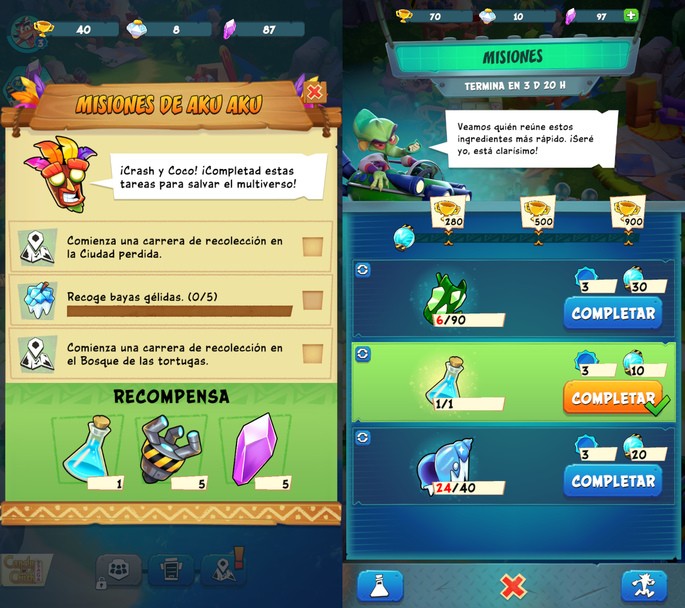 Later you will unlock the Quest Panel. Initially, tasks focus on getting resources or crafting specific items. Of course, instead of giving you rewards similar to the Aku Aku Missions, the missions in this panel will give you experience and mojos to get trophies. These trophies are used to redeem prizes in the Bandicoot Pass (the classic season pass).

Try to review all the missions in progress and thus make better use of your time. Lots of prizes await you!

2. Stay on the center line

This advice is very simple. When you're in a match, try to stay in the center line of the race. This will give you a better margin to react to obstacles, changes in the map or stone balls approaching you. There are times when it is convenient to be on one of the two sides, of course, but the golden rule is to stay in the middle.

3. Visit the vending machine every day

The vending machine is the place to buy purple crystals, some cosmetics, and resources or items. You will also receive special offers, but you will always need to spend money to take advantage of them. Fortunately, in this same menu, you can get free stuff with little effort. 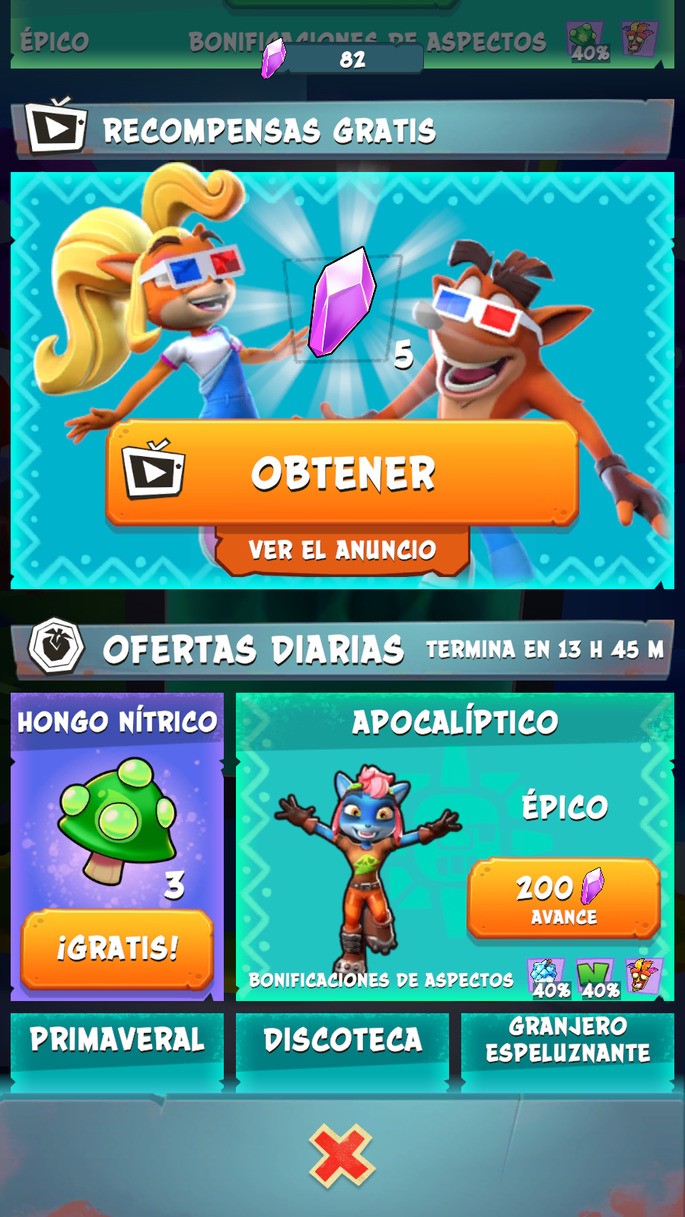 On the one hand, there are free rewards. All you have to do is watch an ad that is 30 seconds long (or even shorter). After that, you will get prizes! In general, they give you purple crystals, but sometimes they offer different resources that will help you create items.

On the other side are the daily deals. You must pay for almost everything except the first item that the section shows. The only thing you have to do to redeem the free items is to click on the " Free! " button.

4. Make the most of labs and pens

Before making a race or stop playing, we advise you to use the laboratories and corrals. The reason is quite simple: there is a waiting time for each item you want to create. While purple crystals do speed up this process, save them for other things.

It is good that you get used to creating items continuously. In this way, you will free more space in the Silo, complete more missions, and have enough items to fight against the minions and final bosses of the game.

5. Run on resource islands whenever you can

The resource islands, divided into zones, offer a good number of resources that you should accumulate. You will need them to progress in the game. Each zone of the islands offers you to participate in races that contain resources specified on the screen. 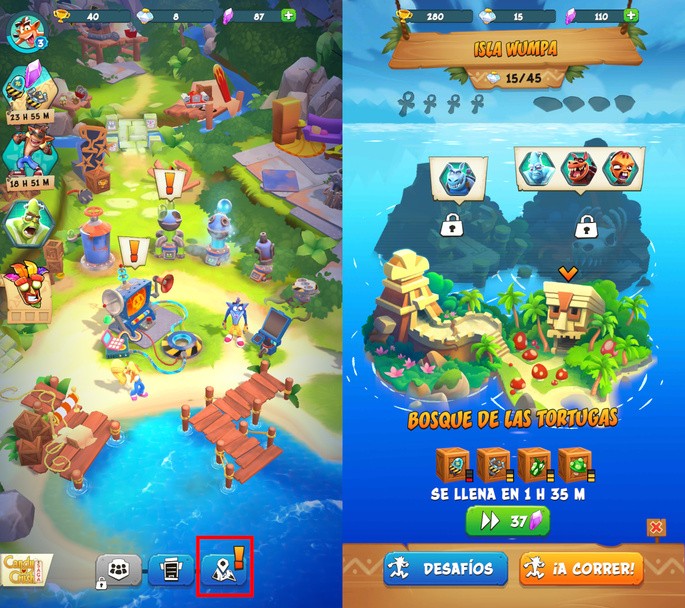 Whenever you can, run in one of these zones. At the end of a race, the countdown will begin to replenish the resources you earned in the race. Even so, you can repeat the race as many times as you want until you get all the resources in the area.

When you complete races on these islands, the game will sometimes ask if you want to double the rewards. Do it! You only have to watch an ad of 30 seconds maximum. We recommend doing this especially if you got a lot of resources in the race.

6. Increases the capacity of the Silo

The Silo is the place where you store all the resources you get in Crash Bandicoot: On The Run! Initially, the Silo has a capacity of 250 resource stocks. While it's more than enough for the first few hours of gameplay, it's nice to accumulate alpha parts and beta parts to improve the Silo. Every time you upgrade the Silo, you will add 50 stocks to the maximum limit.

In case you have too much of a single resource, the Silo is the place to sell it. To do that, go into the Silo and select the resource plus the amount you want to sell. In return, you will get Wumpa Fruits. In any case, we recommend not selling everything!

7. Change direction in the air

This is a trick that will come in very handy in many races. It is important to change lines or lanes in Crash Bandicoot: On The Run!, as we must adapt to what comes later. Sometimes we jump and realize that we will hit a wall or a TNT box. Luckily, we can change lanes mid-jump.

Another detail to keep in mind is that you can attack in the air. If you see that there is a box with Wumpa fruits on top of another one with TNT, jump, and press on the screen to hit in the middle of a jump. Remember these two playable mechanics that we discussed in this section; they will serve you well in difficult races!

8. Learn to hit two boxes side by side

In each race, you will find a lot of boxes to break. It is very common to see boxes stacked one on top of the other, which you can break by jumping and hitting in the air. However, there are times when you will see boxes placed next to each other. 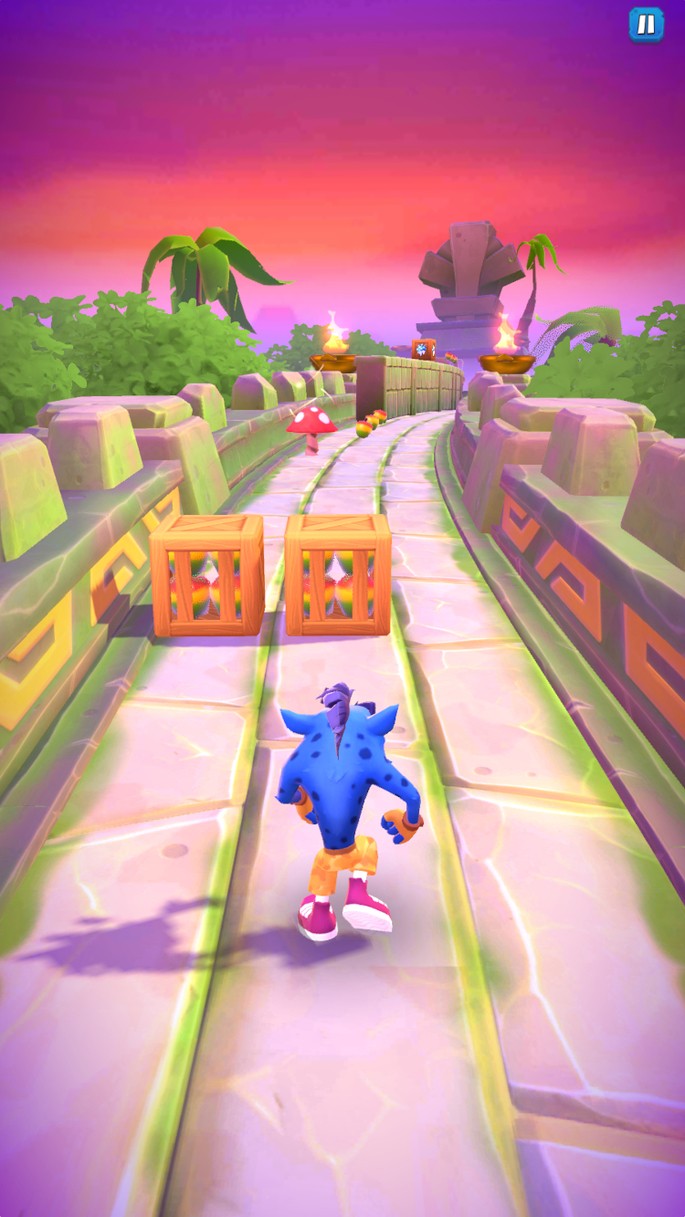 To break the two boxes, there is a simple trick to do but that requires some speed. Keep heading towards one of the two boxes. When you're pretty close to it, hit and switch lanes to where the other box is. If you time it right, you'll break both boxes and take home their juicy prizes!

9. Join a team and participate in survival races

After defeating a few bosses in Crash Bandicoot: On The Run!, you'll unlock survival races. To participate in them, it is necessary to be part of a team of players. Don't be shy and join one! These survival races are quite challenging and you will have to give it your all to lead your team to victory.

The ultimate goal of these races is to amass enough trophies to reach high positions. The higher the finishing position, the more prizes your team will receive! Even better if you help your team to reach the first position because you will receive purple crystals, resources, and exclusive skins.