There are Google games that are free and very fun. They are games that are hidden and that are found by doing specific searches. In this article, we will focus more on popular Google games and most of them you can play without downloading. You'll find hidden games in Google Search, Google Doodles, and even Google Earth/Maps!

The games on this list are the ones you can find by typing certain words into Google, both in Google Chrome and other browsers. There are games that are displayed directly when searching, while with others you must enter a link. 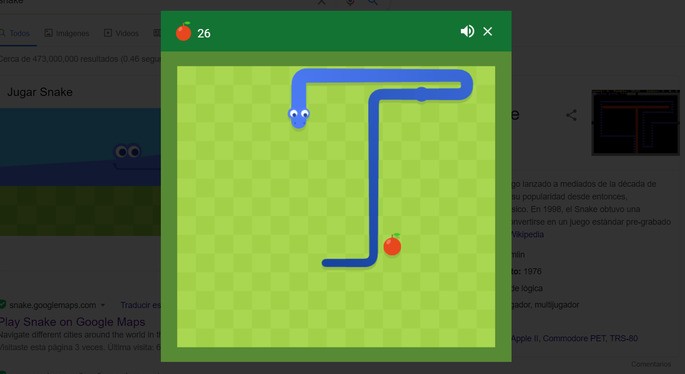 The Snake game is the one where we control a snake that likes to eat and eat and eats a lot! As the tail grows, it is more difficult not to crash into itself or the walls.

How to Play: To play this game, type " Snake " in the Google search engine. The first result is this game.

T-Rex Dash is a running and jumping game that never ends. You control a dinosaur that must dodge obstacles so as not to lose the game. The longer you stay alive, the more points you get! A perfect game to see which of your friends gets the highest score.

How to Play: Play T-Rex Dash here. You can also play it if you turn off the Internet on your PC, laptop, or cell phone and enter Google Chrome. The game will come out immediately!

Solitaire is the classic game that has given us so much entertainment on many occasions. You can choose between easy or hard mode.

How to Play: Play Solitaire here. If you're on Google, you can type " Solitaire " and the game will appear as the first result.

Minesweeper is a famous game where you have to click on the fields and try not to blow up any mines. The numbers that come up give you a clue as to where the mines might be. Be very careful where you click! You can select between easy, medium, and hard modes.

How to play: To play this game, type " Minesweeper " in the Google search engine. The first result is this game.

Zerg Rush is a game of attacking circles that will try to destroy the results of your quest. You must click at least 3 times on each circle, depending on the color, preventing, by all means, destroying all the results. The game will measure your APM ( Actions Per Minute ), that is, how fast you are able to press the mouse button. Be quick and accurate!

How to Play: Play Zerg Rush here. If you're on Google, search for " Zerg Rush " in the browser. The first result is the game itself. 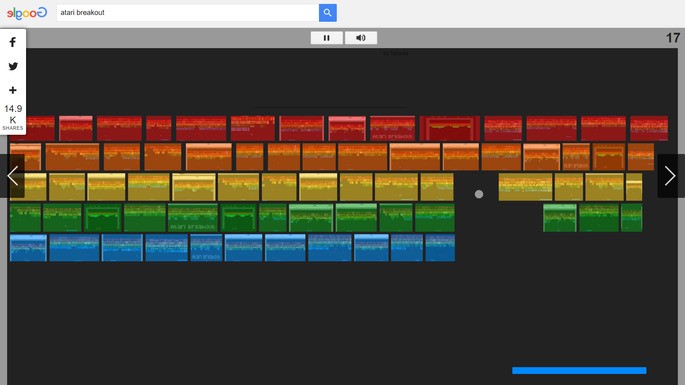 Atari Breakout is a game reminiscent of classics like Pong! That is to say: you must bounce a ball to destroy the blocks that appear on the screen. Your mission? Get as many points as possible and prevent the ball from falling to the bottom of the window. Easy to understand, but hard to master! 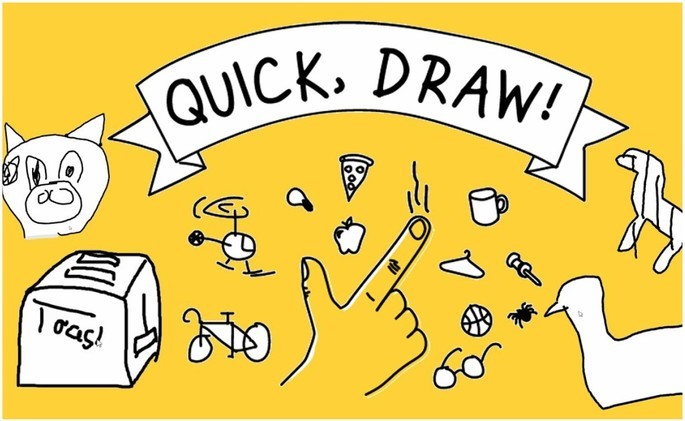 In Quick, Draw, the goal is to draw whatever Google asks you to in less than 20 seconds. Artificial intelligence will try to guess what you are drawing. A most curious experiment!

How to Play: Play Quick, Draw here. If you're on Google, type " Quick Draw ". The first result is this game. 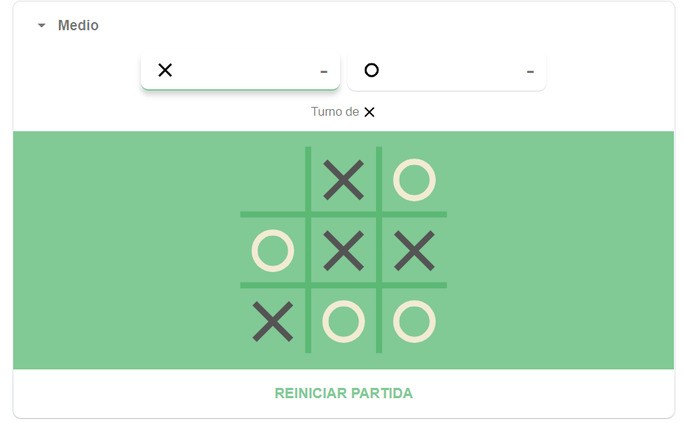 Known in Spanish as "Three in a row" or "Ceros y Cruces", among other names, it is nothing more and nothing less than making 3 crosses or zeros in a line. You can play against the artificial intelligence in three difficulty levels, or against a friend on the same PC!

How to Play: To play this game, type " Tic Tac Toe " or " Tic Tac Toe" into the Google search engine. The first result is this game.

Google Doodles are tributes that the company makes in relation to important dates, people, and events. The funny thing is that some Doodles can be played! Just below we put the list of the best games you can find, along with the links to access them.

If you want to take a tour of the Doodles to see what tributes have been made, do not hesitate to enter the Google Doodles page. From now on we tell you that you will find many interesting things.

There are a few games that use the technologies of the Google Earth and Maps applications. For these to work, you must ensure that you are connected to the Internet and that the geolocation system is activated. 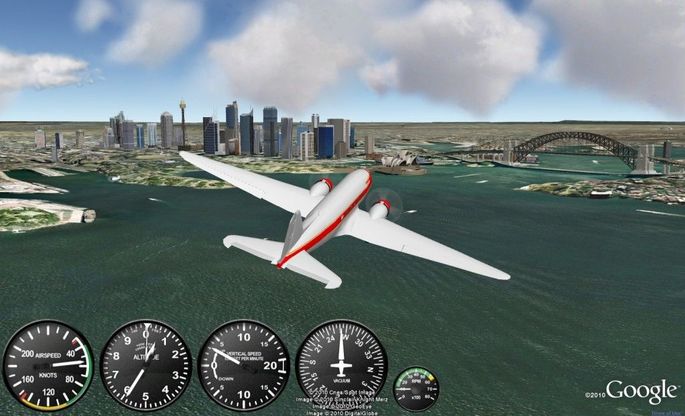 If you know the video game Microsoft Flight Simulator, this is a simpler version! To play this game, you need to download Google Earth on your PC. When you start the program, go to " Tools " and then click on " Enter flight simulator ". Suddenly, you will be able to fly over the world with a plane! Even though the graphics are very simple, it's still fun.

The game in its entirety is only available during the month of December. When the Christmas season arrives, you can follow Santa and Mama Claus with their elves on Google maps, learning more about the legend of Santa Claus. The rest of the year offers us different mini-games that are as enjoyable as they are fun. 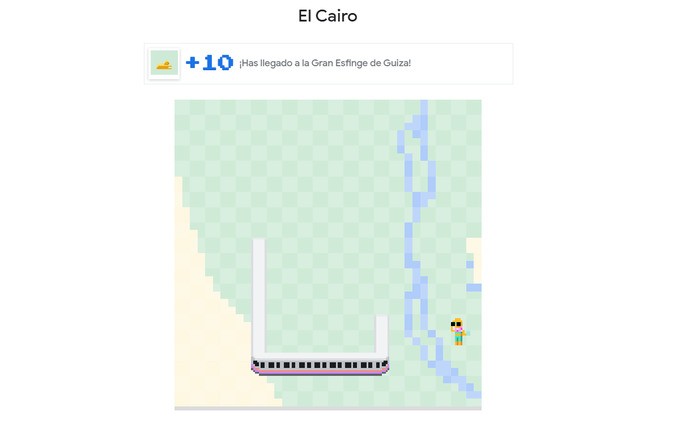 This game is similar to the hidden game Snake that we introduced earlier. However, in the Google Maps version, you drive a train! It allows you to stage different cities and parts of the world. You must pick up passengers and avoid crashing into your own cars or the "walls" on the map. A classic reinvented in a curious way.

Play Google Maps Snake here. You can also access this game by typing " Snake Maps " in the Google search engine.

Note: Just say the names in bold to the Google Assistant. For it to work well, you may need to change the language to English.

Android, the mobile operating system, hides a few games. The two that we present to you do not need the Internet to work, so you can play them wherever you want!

Google Clouds is a version of T-Rex Dash but for Android. When you run out of internet on your mobile phone or tablet, open the Google search app and try searching for anything. An animated cloud will appear. If you click on it, it will take you to the corresponding game. Try to dodge all the obstacles!

The gameplay is simple. You will drive a cloud through the skies and you must dodge all possible obstacles. It's almost like the unforgettable Flappy Bird!

If you go into " Settings " and then " Phone information " (or similar), there is a section called " Android version ". If you press on that section numerous times in a row, a new screen or even a game will open. With each version of Android and mobile, one thing or another can happen. It's a matter of trying.