Bermuda, one of the Free Fire - Battlegrounds maps, is a desert island. As in any Battle Royale-style game, we face dozens of players in bloody combat. We start each game without any equipment, only with basic clothing.

It is essential to choose a place to land by parachute and start collecting loot if we want to stay alive. Therefore, getting to know the island as well as possible will help us achieve victory. The places where the loots appear are random and we must quickly equip our character with different supplies and weapons, even if it is a simple pistol. However, there are sites that are more likely to be successful than others.

At the end of the article, we show you the map of Bermuda remastered! 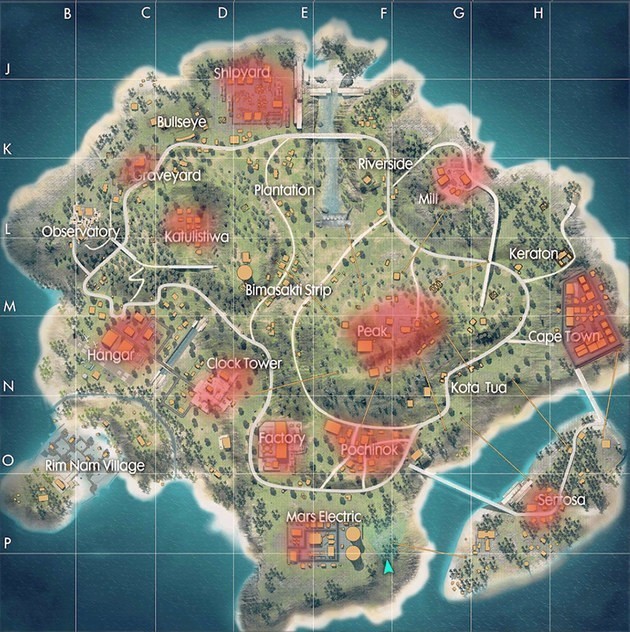 We will find valuable loot in places with more buildings and industrial areas. Vehicles regularly appear in these industrial areas and in garages near the main road. We must bear in mind that these areas attract many players, compared to others that are more isolated. If you are still learning to play, it is advisable to avoid them. 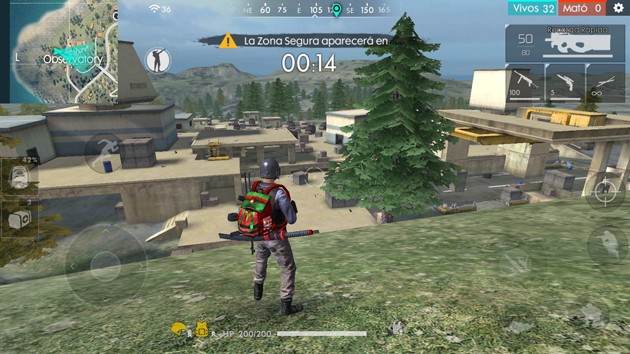 Formerly known as the Outpost, this new area is located in western Bermuda. The loot is scattered in the different rooms of this place full of ramps, high places, and too many blind spots. If you like close-range combat, this is a good place to start.

In truth, it is a kind of Mill but in a smaller version than its counterpart. That means that this portion of the map can become quite dangerous, especially if the safe zone circle closes near the Observatory. Worth exploring, but watch out for lurking players!

This new area is found in the northwest area of ​​the map. It was previously known as Ranch. It has several places to find good loot, but the best building for it is the mansion in the north. Inside there are several rooms and corridors that we can explore.

If you decide to land here by parachute, try to start on the roof and work your way down each floor from there. However, keep in mind that with each passing day, more players come to explore this new place, so have that weapon ready! 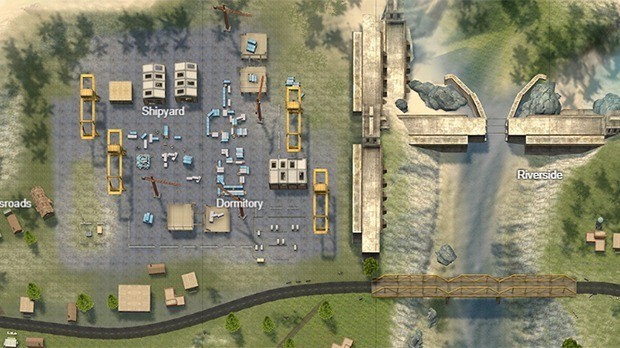 Located in the northern part of the island, Shipyard contains a lot of loot in terms of weapons and supplies, such as vests and helmets. The two warehouses in the upper left corner have a high probability of containing weapons, while in the central ones we will find many bandages.

We also have a good chance of finding loot in the Dormitory area. If we are lucky enough to take a vehicle, it is good to take advantage of the road to escape. Be careful with the cranes, since some players can use them as a high point and have a better view of us. 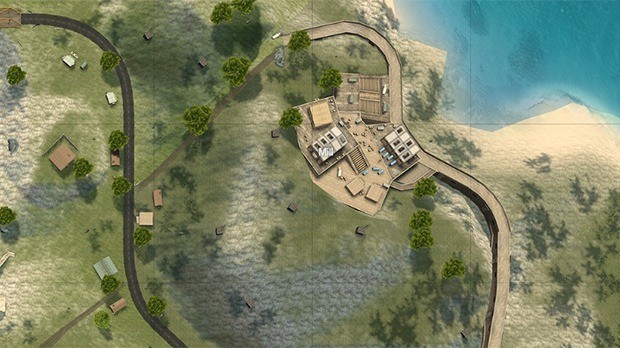 This ancient workshop, located on a hilltop on the northwestern tip of the island, is a loot-filled place. Always try to land on the top, then head to the Mill. The terrain is uneven, and full of ups and downs. The two houses in the lower-left corner are in a small valley, so it's best to save them for last, as we're vulnerable to shooting from up the hill.

Mill has two roads, being able to approach the warehouses with a vehicle and leave quickly. Despite being at the edge of the map, it attracts a lot of players, so we have to be careful. 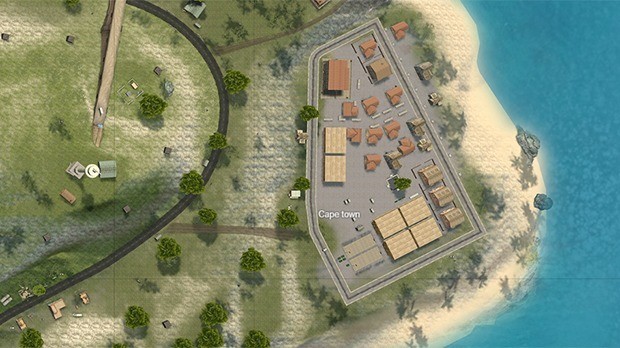 It is a small city, located in the extreme northwest of the island. We can find a vehicle such as a Jeep or a tuk-tuk, which suits us since the main road of the island is close by. The houses have different rooms that deserve to be explored. In the lower-left corner, we see two-story buildings perfect for attacking enemies without exposing ourselves too much. 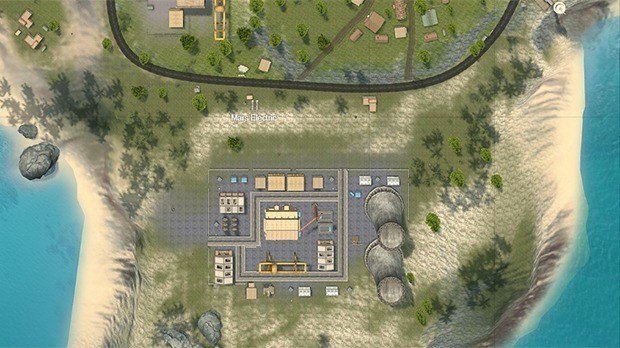 A large site, with many areas where we can find good loot and vehicles. The warehouses are large and do not have many places to ambush or be ambushed. However, there are places, between pipes or behind fences, that can hide unpleasant surprises. In the central, there is a crane where we can climb to get a better view of the area. If we can't find a vehicle, we have to take advantage of the protection of the side trees to get out of the plant, since we are vulnerable on the opposite hill. 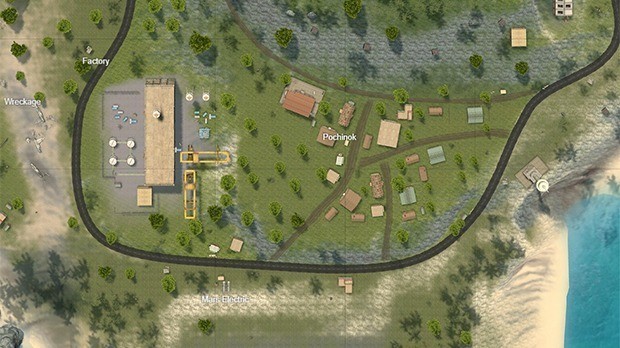 It is a tall, multi-story building with the small town of Pochinok to its right. We also have a Hangar on the left side and the Mars Electric power plant to the south. If we pick up a sniper or similar weapon early in the game, we can easily keep an eye on all three of these locations. There are some containers on the right-hand side that are worth a look at. It is also very likely to find a vehicle there. 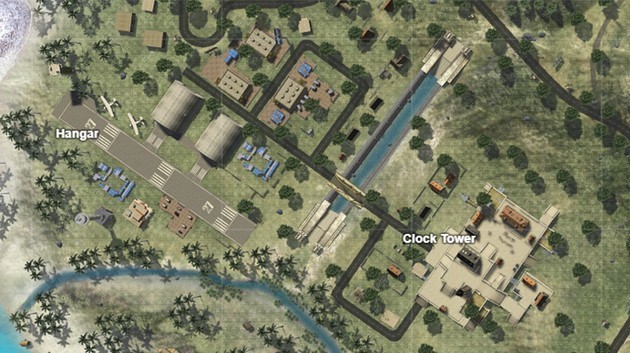 Like any military zone, Hangar usually contains a varied loot of very good quality. It will not be strange to find level 3 helmets and vests, in the hangars and trenches. In addition, there are many possibilities to find powerful weapons and extra supplies.

This area is divided into two main zones: the Hangar zone and the Clock Tower, separated by a canal. The Clock Tower area is ideal for landing if the plane's route allows it. As it is slightly taller, it offers good visibility and the main building has quite a bit of loot. Be careful moving along the airport runway; a medium sniper will be enough to take you out. 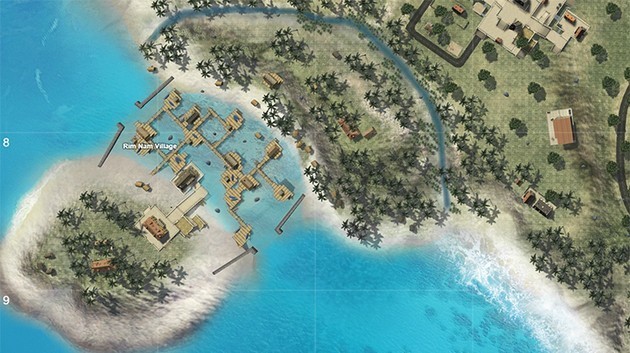 Rim Nam Village is a fishing village located in the extreme southwest of the map. In it we will find good loot, especially in the main mansion of the small island. If we jump here, it is advisable to go along the wooden piers that link it to the main island. On the other hand, if we go through the water, we will move slowly and be exposed. There is a nearby riverbank; if you prefer, use it to sneak up near Hangar. 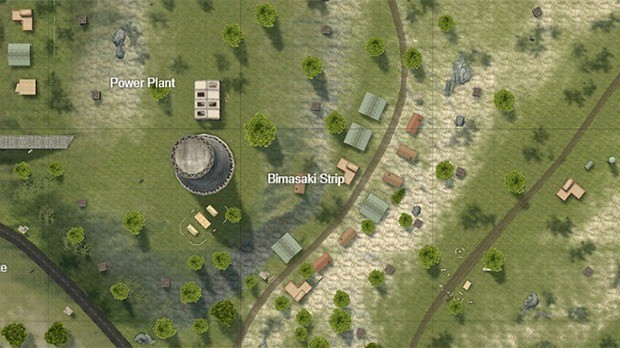 Bimasakti village is crossed by a dirt road. It is in a small valley and it is very easy to find a vehicle in the garages of the houses, as well as different types of weapons. It is best to enter the town from the left side, in case you don't have a vehicle, using the power station and its chimney to observe the terrain before proceeding. As the area is full of trees, if the final circles of the game are there, prepare for a bloody fight. 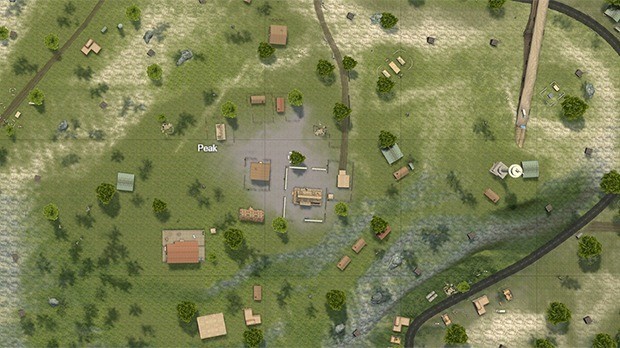 It is a central place on the map, the highest area of ​​the island. At the top, there is a kind of abandoned hotel. At the base of this hotel, it is common to find loot. It is a very dense area, full of trees and rocks that allow deadly ambushes, especially in the latter stages of the game. If by any chance the final circles are there, it is preferable to go to the top of the hill and move from there. The south side is steeper and with many more trees. On the north side, there is a road from which it is easy to shoot at oncoming vehicles. 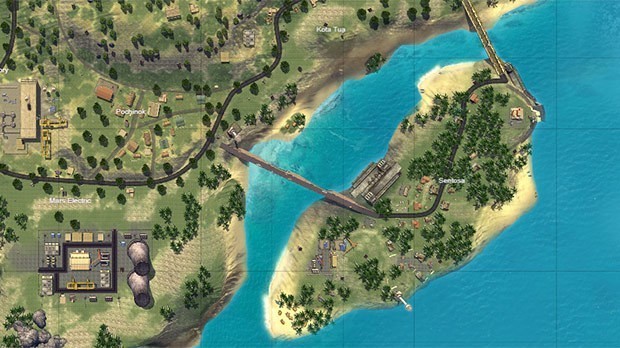 It is a small island, linked to the main one by two bridges. On the east side, there is a kind of lighthouse on whose roof there is a high probability of finding very good loot. Use the tires to jump and get there. Going down the road, there is almost always a vehicle, and inside the tunnel, we can find supplies. If you start the game in Sentosa, remember that you need to exit via the bridges or swim through the straits. It's faster over the bridges, but they can ambush us. Although it is quiet, swimming is slower. Naturally, while swimming, we cannot shoot. 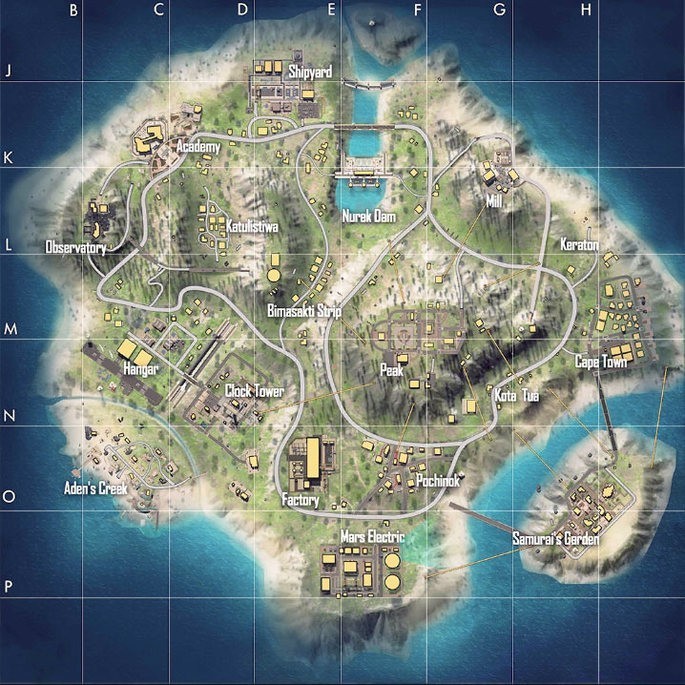 Bermuda was remastered to release a new version of the map but is currently only available in Classic mode. In addition to graphical improvements and changes to some locations, four new zones have been added to existing locations on the map. Get to know them! 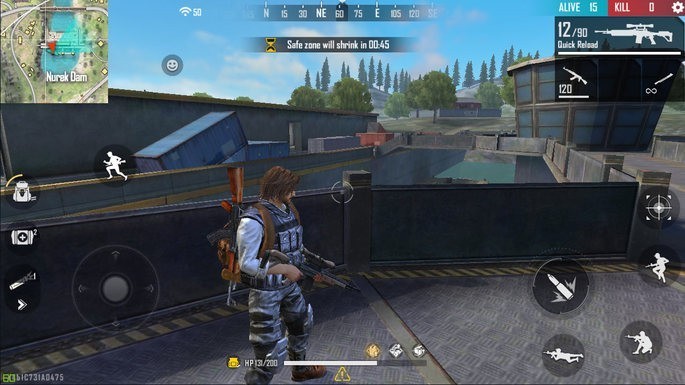 The area where the old hydroelectric power station is has been completely changed, which means that there are new areas to discover and with good loot. It's a perfect place to land at the start of a match, and it's a good connection point to other areas of the map.

Do not hesitate to explore every corner of this place well, but stay alert. Any sniper on the bridge north of Nurek Dam will have you in their crosshairs. Duck if you hear gunshots! 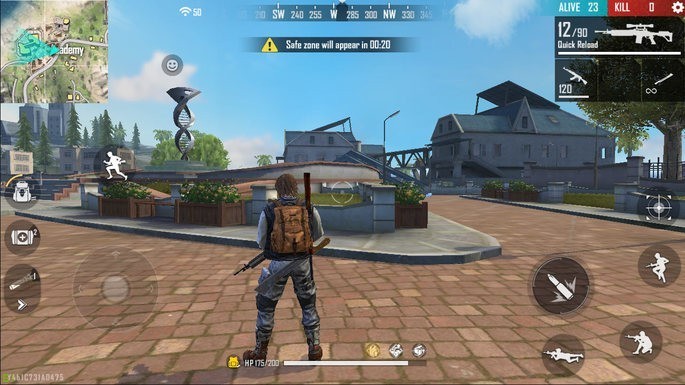 What used to be Bullseye and Graveyard has become Academy in this new version of Bermuda. It is a kind of university with large buildings, divided into several sections and with a courtyard with modern sculptures. There is a lot of loot scattered around this area, and it is more than likely that Academy will become popular.

If you choose to land here, try to land on the roof of the main buildings. 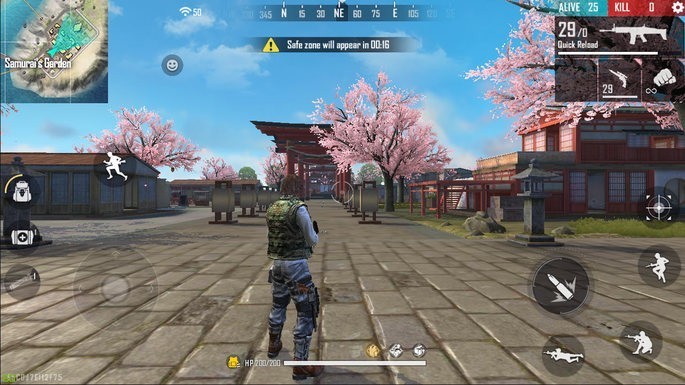 Sentosa Island has been replaced by a pretty Japanese village. Buildings with samurai decorations are full of loot. Although the main street is beautiful, do not stand there, as you will be an easy target to shoot down.

Though set back from the rest of the map, Samurai's Garden is a good starting point, as long as you keep an eye out for closing circles. Don't be left behind! 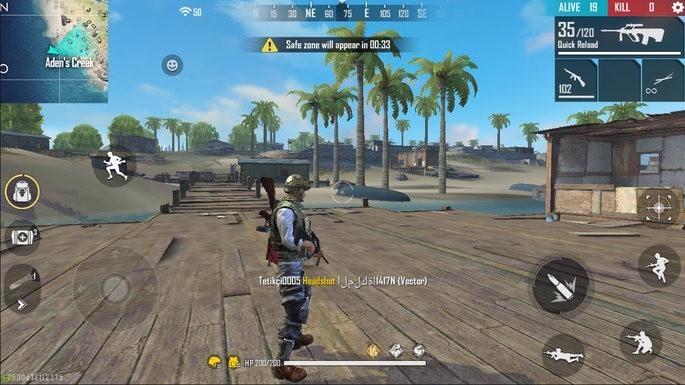 The village of Rim Nam disappears into Bermuda Remastered in favor of Aden's Creek, a more accessible but less interesting location. There is loot scattered around this new place and it is easier to hide or move from one place to another; still, we find Aden's Creek useful only for later entering Hangar or Clock Tower from the south.

Battle Royale-style games like Free Fire, where the goal is to survive to the end, rely a bit on luck, but knowing the map makes it all easier.