Forza Horizon 4 is an excellent racing game that contains a long list of cars to drive. Of all of them, there is a small number of cars that we call abandoned cars. These vehicles are available to find when rumors about them arise. In total there are 15 abandoned cars to search in Forza Horizon 4!

In this guide, we share a map with the locations of each abandoned car. Below, you will see the names and images of each car, as well as extra details so you can find the warehouses. In the case of the last five cars, it is necessary to fulfill a prerequisite. Pay attention to what the game asks of you! 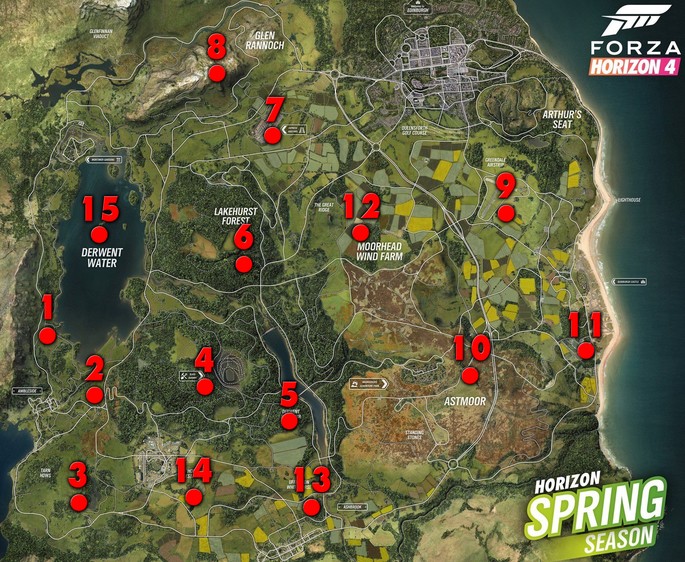 Location: Southwest of Derwent Water Lake, in between the roads.

Location: Southeast of Tarn Hows, north of the roads, and west of the small lake in the area.

Location – Just below the Slate Quarry.

Location: In the forest of Derwent Reservoir, just below the letters that appear on the large map.

Location: In the southern part of Lakehurst Forest.

Location: In the southeast of Glen Rannoch, in a high position in the mountains.

Location: South of the Greendale Airstrip, just before entering the farming area.

Location: North of Astmoor, slightly off the road.

Location: South of Bamburgh Castle, which is located to the east of the entire map, near the coast.

Requirement: You must buy Bamburgh Castle worth 10 million CR. Then the rumor will come out and you can search for it.

Location: In the north area of ​​Moorhead Windfarm.

Requirement: You must be in the spring season before the rumor about this car comes out.

Location: Among the trees south of Uffington White Horse, after crossing the road.

Requirement: You must be in the summer season before the rumor about this car appears.

Location: In the south of the Horizon Festival Site, north of the small lake near the road.

Requirement: You must be in the Autumn season before the rumor about this car is out.

Location: On the small island in the center of Derwent Water.

Requirement: You must be in the winter season before the rumor about this car appears.

Details about the abandoned cars

Now that you know what the Forza Horizon 4 abandoned cars are and where they are, you should keep these nuances in mind: