The King of Fighters ALLSTAR became a phenomenon after its worldwide release on mobile. The famous saga comes to our mobile phones with a somewhat new approach, with RPG touches, and there are many details to take into account. If you had a hard time getting off to a good start in this game, we've got you covered with 7 essential tips! 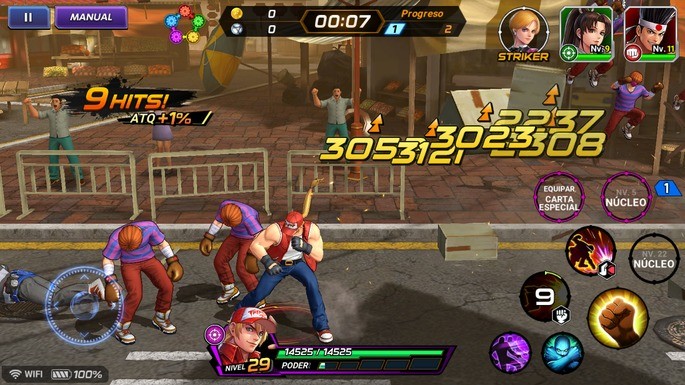 Don't be fooled into thinking that all you have to do is tap the screen randomly to defeat all the enemies. Although The King of Fighters ALLSTAR is simple in mechanics, it requires a bit of tactic and strategy to overcome all the fights.

Each fighter has its own set of attacks. Learn how to use them correctly to pull off incredible combos alongside destroyers. In that sense, one of the first things you should do is always fight in manual mode. In this way, you will have complete control in the execution of attacks and abilities.

Attacking all the time is not everything in this game. The defense and dodge buttons are there for you to use, and they will come in very handy! Keep in mind that sometimes you'll be facing four or more opponents at once, so it's in your best interest to defend yourself. If you find yourself cornered, defend yourself, dodge, and attack again when you see a clear opportunity.

Adopt a type of combo for each fighter and formation

If you're still in your early hours of gaming, there's no need to try to be too innovative in The King of Fighters ALLSTAR. Stick to simple combos, switching between basic attacks and abilities. Little by little, you will be able to understand the potential of your fighters and better chain all the movements.

When the time comes, you'll need to learn how to make better combination attacks to get the most out of your entire build. To do this, we advise you two ways to focus your fights.

The first way is to play a lot with aerial combos. You simply have to make an attack or ability that sends the opponent into the air. When that happens, ask for help from your support character and combine it with special abilities or the Super. It requires you to control the timing of your attacks well, hitting at the exact moment. You will need to practice!

The second option is to take advantage of all the characters in the formation. Face an enemy and attack with basic hits. Then use special ability and immediately switch to another character. Repeat this process constantly at just the right time, and you'll be able to chain attacks non-stop!

One of the basic features of The King of Fighters ALLSTAR is the fact that the player can choose a team of 3 fighters. That is the fundamental part to succeed in this game. The characters must be combined in one way or another so that the team can take full advantage.

For example, a team made up of only men or women will be stronger than a mixed one. There are also preferences when it comes to fighters that are from the same version or year, like everyone from the year 94 or 97. If you manage to make these types of combinations, you will get a bonus information.

Strikers need to have a Fighter's Bond

Fighter Bond occurs when a Beater offers a bonus or advantage to the corresponding fighter. If you still don't understand how the theme of these links works, you may want to use the "Auto Form" option. This will show you what the ideal group is for the corresponding phase, including Beaters.

You will see that each fighter has a specific element. This element system is simple to understand. A particular item will be stronger than a specific item, but weaker than a particular third item. Make sure you have at least one fighter with the winning element, depending on the episode or stage you are going to participate in.

That is also a rule for Beaters or secondary fighters. All of them need to be chosen according to the advantages offered by the leader of the group. That is, if the leader of the formation is purple, you should have at least one other of the same color to take advantage of the bonus.

If you want to know which element is superior or inferior to another, we tell you in the following list: 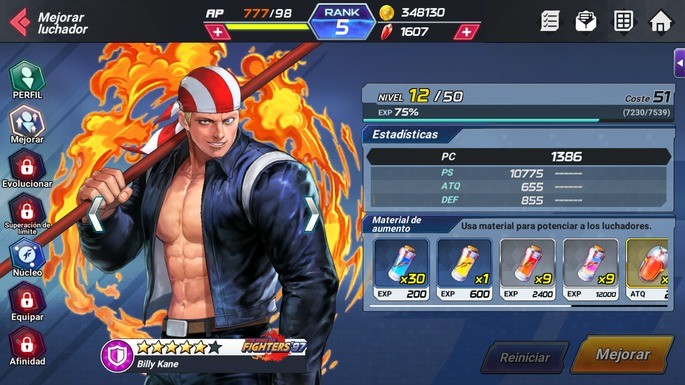 After finishing the first mission, you will automatically gain 2 more fighters. Over time, you will be able to acquire others, even your favorites from the franchise. Still, even if you don't have the strongest characters, never forget to upgrade them. The battles will get tougher as you progress and you want to have at least one high-level character.

As a general rule, the best thing to do at the moment is to put your resources into the character you chose at the start of The King of Fighters ALLSTAR. The easiest way to improve it is by fighting since at the end of some fights you will level up. The same goes for secondary fighters that are part of the formation, so keep that in mind!

The other way to upgrade fighters is by using experience potions. Characters can also equip battle cards or increase their affinity. In the case of affinity, you must check which food the fighter likes the most. To find that out, go to the Affinity menu and see which food is marked with a pink smiley face emoji.

One of the best aspects of The King of Fighters ALLSTAR is being able to summon new fighters with frequencies. There are several ways to do this, and all of them can be done in the Summon menu, within the main menu.

As you progress through Story Mode or Event Missions, you will receive special items. Among them, the most common is ruby. Our recommendation is to stack to summon 10 fighters at a time. For this, you will need 900 rubies, although on certain occasions you can also summon 10 with only 500 rubies.

If you are worried about saving enough rubies for this task, fear not: in the first missions of the game you will get a minimum of 700 rubies. This is important to keep in mind since it is the easiest and fastest method to get more characters. If you have a duplicate, it will become a Soul. You will be able to use that to strengthen your fighter.

In addition to rubies, there are also tickets and other items that give away capsules and battle cards. Feel free to summon whenever you can!

5. Participate in the Dungeons 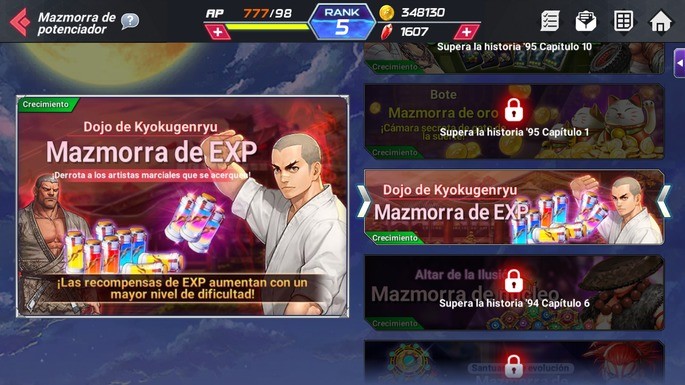 Dungeons are a perfect type of quest to get many new items and materials that you need for character evolution. The best of all? You can repeat the same Dungeon as many times as you want, as long as you have enough Action Points or AP.

As you progress through the story, you will notice that the difficulty levels of the Dungeons will go up quite a bit. Although there will come times when it will take time to overcome the stages, the reward you will get for completing Dungeons will be of high quality.

The King of Fighters ALLSTAR is a game that is easier to understand than it may seem, as it has similar mechanics to other mobile games. One of these mechanics is the existence of Daily Missions and prizes for connecting to the game.

Both are essential to have a good experience and progress quickly in the game. Completing daily quests will reward you with rubies, AP, and gold coins, among other prizes. For more joy, the gift for connecting will be automatically received by doing little or nothing.

Even if you can't play almost, enter The King of Fighters ALLSTAR every day. That will ensure that you eventually acquire the necessary resources to open chests and thus summon fighters and battle cards for your collection.

Don't forget to do growth quests

If you don't know where to start or how to continue, listen to the growth mission. It will guide you on your way to improving as a player and will take you by the hand throughout the Story mode of the game. In addition to enjoying a story with the characters of the franchise, it will help you better understand all the mechanics that The King of Fighters ALLSTAR offers.

Of course, following the growth quests will lead you to earn more items as rewards. For that reason, we always invite you to fulfill these missions without fail. If you don't know where it comes from, it appears at the top right of the screen.

7. Add friends and check your mail

From time to time the menus in The King of Fighters ALLSTAR can be a bit confusing, full of information. Unfortunately, you may lose sight of some basic things, like adding friends or checking your mail.

It's easy to check if you have messages in your mailbox. To do this, click on the second icon from the top right, inside the main menu. It's helpful to take a look from time to time, especially if a red dot appears on the icon. Throughout the weeks, you will receive mail with rewards for your performance or for the start of a special event.

Adding friends or other unknown players is important. Your formation will consist of the main leader, two secondary fighters, and 3 Beaters, but you can also have Supported. Support fighters are controlled by a real player, whom you invite to the match. Mind you, it can only be called once per battle!

Whenever you call a Support in a stage or Support someone, you will earn friendship points. These points can be exchanged for battle cards, potions, or can even be used to summon fighters.