Terraria has many challenging bosses to defeat, each with its own characteristics and ways to summon. In this list, we focus only on the mandatory bosses to beat to progress through the game, both on Normal and Hard modes. We include the ones from the PC, Android, and iOS versions, and we inform you about the attributes of each boss, how to summon them, and the drops they leave when they are defeated.

The bosses in this section are the first ones you'll encounter in Terraria before you can enter Hard mode. It is necessary to defeat them all and take advantage of their drops to progress in the game and unlock the next difficulty.

The Slime King is the easiest boss in the game. He moves like any other Terraria Slime: jumping at you. As he takes damage, he gets smaller and more agile, as well as summoning little blue Slimes that will make combat more difficult. Avoid getting trapped in a closed space, don't let him corner you!

The Eye of Cthulhu will hover above you and summon minions that pass through walls and other obstacles. He uses fast attack weapons to get rid of them and tries to do it just as they leave the Eye. This way you will hit both the boss and the servants.

After taking an amount of damage, the Eye will transform. As soon as that happens, attack him as many times as you can until he charges. He will do three lunges in a row. Dodge and make sure to attack again at the end of his third charge.

Eater of Worlds is like a worm divided into three segments, each of which can deal damage to you. You can attack anywhere on this boss, but if the body loses all its health, the Eater of Worlds will separate into smaller worms. This can be avoided if you attack mainly in the head and tail. 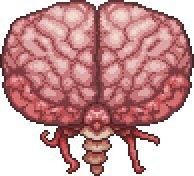 The fight against the Brain has two phases. In the first one, you will have to eliminate all the creatures that this Boss summons. Don't try to attack him directly, it won't work. In the second form, the Brain will quickly teleport and you must attack him while dodging his attacks.

The brain of Cthulhu Drops :

The Queen Bee can attack you with horizontal lunges, shooting poisonous stingers, or summoning small bees. You must avoid all possible attacks, especially the stingers since the poison interrupts the regeneration of life. And as little as it may seem, taking 2 points of damage every second for 10 seconds can make all the difference!

Skeletron is made up of hands and a skull. The objective is to destroy the skull, although in Expert mode you are forced to defeat his hands first. The attacks with the hands are somewhat irregular, so pay attention to their movements. From time to time, the skull will begin to rotate. Try to hit him at that moment since he will have no defense, but avoid him touching you; it will do a lot more damage!

A fleshy Wall is literally made up of a wall of flesh moving towards you. Keep in mind that, once the battle begins, you must be before him and defeat him yes or yes without being able to escape. Either he dies, or you die! This boss can attack with his eyes using lasers or with his mouth. You will also have to fight Starving and Leeches. Defeat them as soon as possible!

Hard-mode bosses are much stronger. Some are improved versions of other bosses, while there are new ones. Whenever one of these bosses appears, you will receive a warning so you can prepare. How could it be otherwise, these bosses leave you better drops!

Also, if you have destroyed at least one Altar, on Hard, there is a 10% chance that The Twins, The Destroyer, or Major Skeletron will spawn automatically. 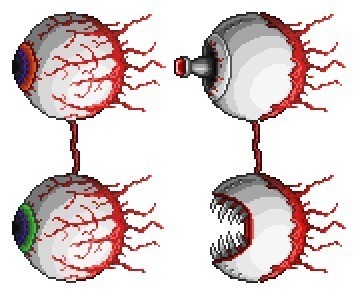 The Twins are an upgraded version of the Eye of Cthulhu. Spasmatizer is more responsible for attacking melee, while Retinator does it from a distance. From time to time they shoot lasers or fireballs. You want to keep an eye out for their attacks and defeat one of the eyes first as soon as possible.

The Destroyer usually approaches you on the ground, trying to hit you from other angles. Throughout the fight, he will also fire several lasers and summon Probes as he loses health. He tries not to let the Probes not fill the battlefield or it will be impossible to get out alive.

It is an upgraded version of Skeletron. In this case, he will throw lasers at you, shoot bombs, and charge in a much more aggressive way. Also, unlike its normal version, the Elder Skeletron increases its defense when it rotates its skull. Be careful when he is about to chase you because he will attack you again and again!

The fight against Plantera happens in two phases. In the first, the boss will slowly move towards you. You can easily deal damage to it if you move constantly, as Plantera is not that fast. As soon as you take half of his life from him, he will start the second phase.

From then on, Plantera will be faster, do more damage, and have a higher defense. Your best option is to use long-range weapons to continue doing damage. This way you will have more time to dodge its seeds, flowers, and tentacles. 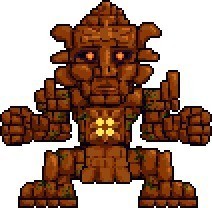 The fight against Golém goes through different phases. The important thing is to attack his head and body. In the first phase, the priority is to dodge his fireballs and get out of his arms while attacking his head. That will make the following phases easier!

In the second phase, Golem will start shooting lasers at you faster and faster the less health it has. If you take all of his life, he will reveal his final form. The goal in the last phase is to attack his body. The surprise is that Golem can go through walls and will be a much more ferocious enemy than at the beginning.

Duke Fishron is considered to be one of the most difficult bosses due to his speed and damage. He at first he will advance 5 times towards you, with small pauses. In each of them, he will launch explosive bubbles and, from time to time, he will summon sharks. The second phase is similar, but much more aggressive and faster.

Don't be fooled. The Lunatic Cultist looks weak, but his attacks are strong. At first, he becomes invincible for a few seconds and teleports several times. He has a fixed pattern of attacks, which is to throw 3 fireballs, an ice ball, and create an electrical orb. Try to attack during this pattern and before he teleports.

After taking an amount of damage, the Lunatic Cultist adds the fourth attack: 2 groups of 5 light projectiles. After using this attack 5 times, he will create two clones of himself. If you damage the clones, the boss will summon a Ghost Dragon or Ancient Vision if there is already a dragon in play. As you can see, it's a rather complex boss!

lord of the moon

This is the last boss in Terraria and therefore also the most difficult. He is the one with the most hit points in the game and the most damaging attacks. The trick with the Moon Lord is that in order to defeat him, you must first destroy the eyes on his hands and head. It's the only way to hurt him!

The eye on the head fires laser beams, while those on the hands alternate between different types of projectiles. When you defeat one of the eyes, it will detach and become a True Eye of Cthulhu, which deals damage on contact and attacks similar to the eyes of the hands. Instead, the holes left on the hands or head will become thorny. These also do damage on contact!

To top it off, the Moon Lord can also summon a tongue that, when touched, will prevent you from healing. Not only that, but Leeches will be summoned on contact and if you don't kill them before they reach the boss, the Moon Lord will be healed for 1,000 health.