Every lover of the Career Mode in FIFA is very interested in the young promises that the game offers. Those with high potential are the main focus for coaches, as these players can only improve. In this sense, in FIFA 20 there are many worthwhile future stars.

Next, we share lists with the best players with 21 years or less. They are divided by positions and, at the end of the article, we tell you what our 11 promising FIFA 20 players are. Pay attention and do not miss good business opportunities with these talents. They can lead you to success!

Donnarumma continues to show a lot of promise as one of the future stars in goal. In the FIFA 20 version, his potential goes up to 92. Alban Lafont and Andriy Lunin, although they are several points behind the absolute leader, are two other goalkeepers to watch closely.

Matthijs de Ligt is the biggest promise of Juventus, known as Piemonte Calcio in FIFA 20 . In this edition, he is the second player who can grow the most, behind Mbappé. Behind him, there are other future promises like Éder Militão of Real Madrid, who has good resistance (88). Do not stop following the rest closely, as they may soon become essential pieces of the defense.

Champion of the Champions League with Liverpool, Alexander-Arnold appears as the best right-back in terms of potential. His crosses (88) and long passes (82) make him a perfect player to start plays and fast breaks.

Brazilian Renan Lodi is the far better performer at the moment, but Alphonso Davies is the most promising left-back at the moment. However, any of the first four are safe bets for the future, to cover the defensive band.

Sandro Tonali still has a long way to go to become a high-level midfielder. However, you will not deny that the potential of 90 of him is very attractive. Who knows how much he will evolve in a year or two! Aside from him, Sander Berge, Declan Rice, and Boubakary Soumaré all deserve a chance.

There are a good number of young midfielders who can become legendary players, perhaps at the level of Zidane or Kaká. For example, Kai Havertz and Jadon Sancho are two that can reach up to a score of 92, so bet on both! In the third position, Manchester City's Phil Foden also has a bright future.

Both Mbappé and Vinícius Júnior are players already known around the world. Between these two, Mbappé is undoubtedly the one with the most promise, because at 20 years old he has become the star of Paris Saint-Germain. He has a potential of 95! On the other hand, Vinícius is building a reputation at Real Madrid and has plenty of room for improvement.

The former Benfica player João Félix arrived at Atlético de Madrid and established himself as an unquestionable crack. The young Portuguese can reach a potential of 93, one of the highest on this list. He is fast, has a good dribble and shooting accuracy that leaves everyone speechless. Still, don't look down on Håland, Osimhen or Boadu!

Team of young promises in FIFA 20

We have imagined what a football team with the most promising players in FIFA 20 would look like. It is true that the players that make up this 11 are not the best in current quality, but it is all about the future!

Find out what our choice is: 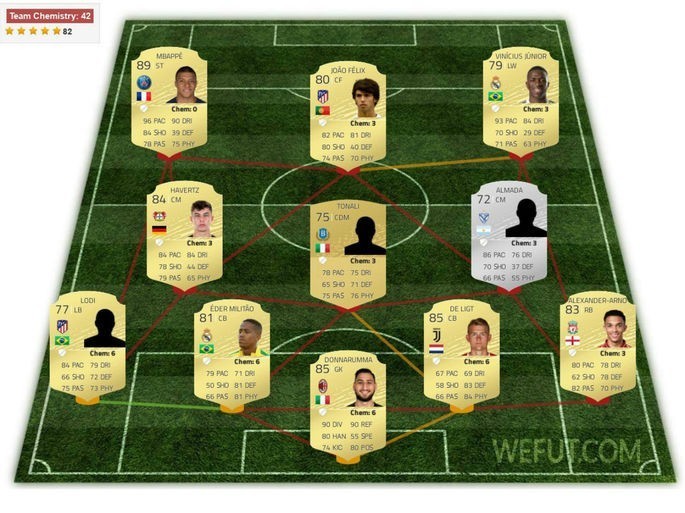