Ditto is one of the most wanted Pokémon in Pokémon GO, due to the fact that it is one of the rarest. Although somewhat weak, this Pokémon is popular due to its transformation mechanic. Also, capturing it is necessary to complete one of the tasks in the quest "Let's GO Meltan! 3/9".

Let's be clear: Ditto can only be obtained by finding it in the wild. What happens is that he never appears in his original form, that is, he will always disguise himself as another Pokémon. To know if there is a chance that you will be facing a Ditto, it is convenient to know which Pokémons it is posing as.

In the table above you can see all the Pokémon that Ditto will transform into in the wild. So whenever you see one of these Pokémon, try to catch it! Do not miss any opportunity. On the other hand, knowing which Pokémon he transforms into will help you not to catch other creatures that aren't on the list in vain.

From time to time, Ditto's list of "costumes" may change a bit, especially in updates that include new Pokémon. In the event that you catch one of the Pokémon shown above, if it turns out to be a Ditto, it will be revealed upon successful capture. 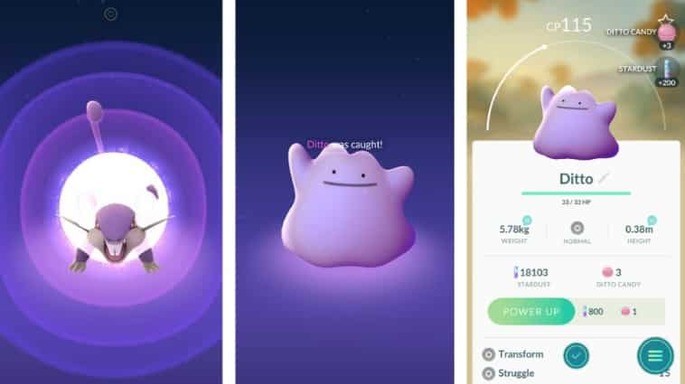 It's worth mentioning that any Ditto already in your collection is used to complete the "Let's GO Meltan!" quest. The game forces you to capture a Ditto from the moment the task is enabled, not before! Therefore, if you have not yet reached that phase of the mission, we recommend that you do not spend a lot of time looking for Dittos.