Mobile Legends: Bang Bang is a MOBA similar to other well-known ones like League of Legends, DOTA 2, or Heroes of the Storm. Similar to all of them in some aspects, this game differs from the rest in other details as well. Therefore, it is necessary to know and understand what is the best way to play.

1. Understand your role in the game 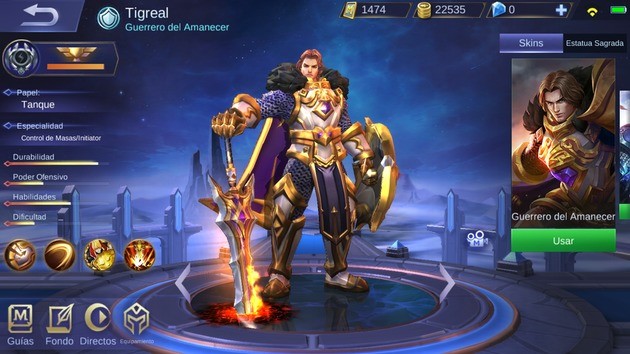 As in all MOBAs, we will have a specific function in the game that will depend on the character we play. For this reason, it is useful to know what roles we can choose, to know what Heroes make them up, and to choose the role that best suits your style of play.

2. Take advantage of the rotation of free Heroes and trial cards 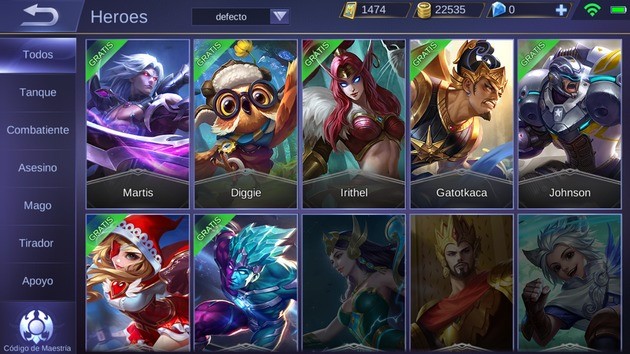 Do you know what is the best way to find our favorite Heroes? Try them! In Mobile Legends we have dozens of them to choose from and very few are available when we play for the first time. That is why it is very important to take advantage of the free rotation, which changes every week.

In general, we have eight free Heroes, depending on the month and special events. The rotation is a diverse selection spanning every possible role, making it a perfect opportunity to meet our favorite Heroes and features.

While we test characters, we will accumulate gold coins that will help us to buy the Heroes that we like the most. It is recommended to first try games against the AI ​​and then play a few Classics. 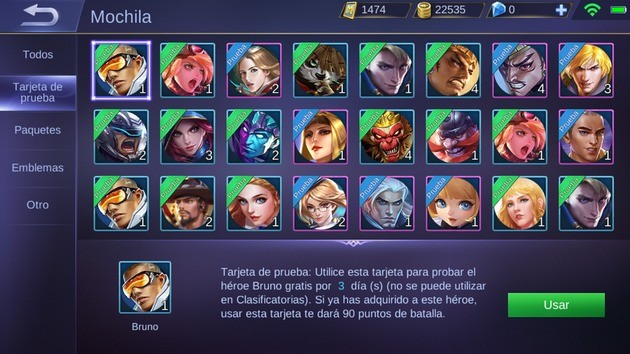 However, this method does not always work well. Want to try a Hero and it's never in the free rotation? Well, you're in luck! Another tool at our disposal is trial cards, which allow us to try out a character for one or three days. We can win them by opening packages and chests. In case of having acquired said character, when using the card they will give us between 30 and 90 gold coins.

As an extra feature, there are skin test cards that change the character's appearance. Skins not only make our Heroes fashionable; they also grant a small buff in the form of hit points, physical attacks, or magic power.

3. Focus on a few Heroes 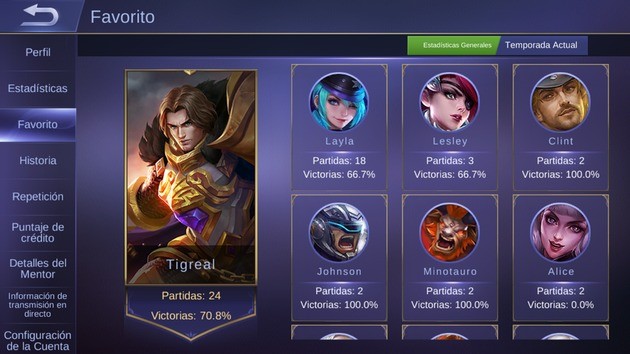 There is a popular saying that many of us know: who covers a lot, squeezes little. Having an extensive selection of Heroes in Mobile Legends, we can fall into trying to play them all. After trying out characters with the free rotation and trial cards, it's important to focus on a few Heroes. Ask yourself the following five questions:

Based on your answers, you will find out which Heroes are the most suitable for you. To give an example, maybe you prefer to use melee characters, protect allies and stay in lane. In that case, Tigreal fulfills those characteristics, but also Minotauro and Gatotkaca. Another example is that you prefer distance and damage enemies explosively, even at the cost of mana. Eudora and Cyclops fill this role perfectly.

It is recommended to focus on only two roles, at most three, with a total of six to eight Heroes. In this way, you will learn to use them better, adapt to different types of situations and bring out the full potential of your favorite characters.

4. Choose the set of emblems and the spell well

Before entering a game of Mobile Legends, there are two ways to boost the characteristics and abilities of our Heroes. 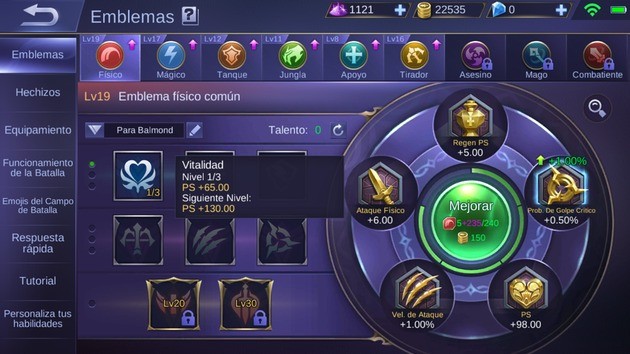 On the one hand, we have sets of emblems. These grant permanent buffs such as an increased physical attack increased total health or decreased cooldown. They are divided into different roles and three more have been added that are basic: physical, magical, and jungle. Mystic Dust is required to unlock all of these sets.

It is advisable to level up the emblems and adapt them to our favorite characters. For example, for the Hero Balmond, you can go for the physical/combatant set and give him more hit points for more stamina.

You can create a specific page for this purpose and, if you need more pages, you can buy them with bonuses. Keep in mind that each new page you buy will cost more bonuses than the previous one (100, 300, etc). 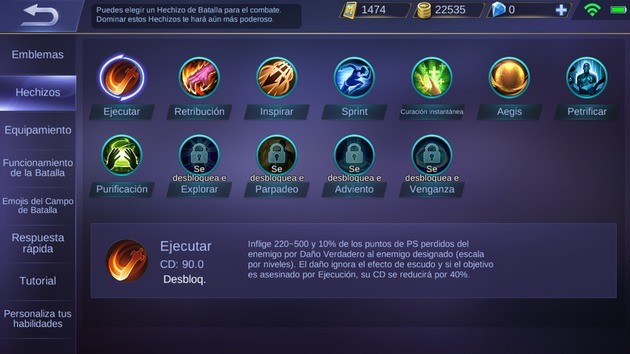 On the other hand, spells are an extra ability that we can have in the game. They are unlocked as we level up our account and can help us chase enemies, survive, clear the jungle or go through obstacles. The choice depends not only on the Hero we use but on our way of playing. A good tip is to try Heroes with different spells.

We already know what to do before entering a game, but what do we do during? 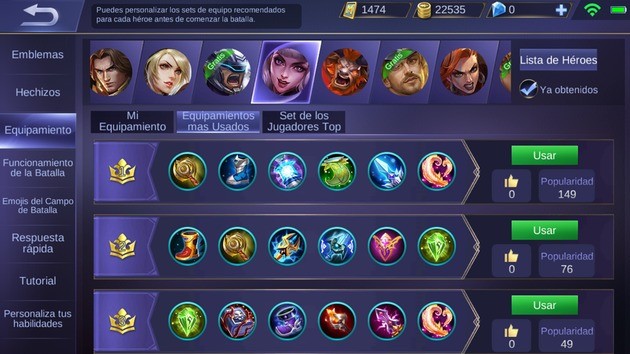 One option is to prepare a specific set of items in the Equipment section. By default, we have three selected for each character, but it is suggested to look in the Most Used Equipment or Top Players Setlist. Take some time to analyze each proposal and find those two or three sets that best suit your Hero.

Already within the game, we have two paths to choose from. The first is to buy one of the two recommended items, whenever you have enough money. They appear in the upper right corner of the screen, while we play. The proposals appear automatically and are part of the set selected by you.

The second way is to enter the item shop and choose for yourself the next item to buy. This is the best way if we want to make changes and adapt our equipment to the game. For example, if you're playing a tank and have a hybrid physical and magical defense set, you'll need to switch if the opponent only has physical damage. You don't want to buy magic defense items!

As an extra tip regarding equipment: read the character guides. Many of them will help you unlock the full potential of your favorite Heroes.

6. Prioritize experience and gold over everything else

One of the common mistakes that we can make in this game is the following: not being close to the minions or minions. Experience and gold are two of the most important things in the game. To gain experience we must be close to the enemy minions when they die, so try not to move away from them.

It is also recommended to last hit minions. Killing these minions is the best way to earn extra money. If we try to stay in line and push opponents back, we will have an advantage in experience and gold, which will translate into better skills and items.

Anyway, avoid being too aggressive or you will surely lose a lot of life, so you will have to return to base. Only be aggressive if you know you'll eliminate the opponent or they won't force you back, which brings us to the next tip.

If we are honest, many times we want to be the star of the game, the MVP. In a team game like Mobile Legends, our ego has to be put aside. On many occasions, helping a teammate will be our best chance to achieve victory.

A perfect example of this is the following: imagine that you win your line and that your opponent has returned to base. If you see that you can drop the turret, go for it! If not, look at the map. If you notice that a teammate of yours has backed away, a good tactic is to walk into his lane from the side and gank.

For those newer to the MOBA genre, ganking means helping a teammate of yours eliminate or push back an opponent. If you are successful, this leads to gaining more experience and gold, as well as being able to knock down turrets or defeat targets like the Turtle or the Lord.

8. Read the notes of each game update

That's it! Another tip is to simply read these notes. And because? 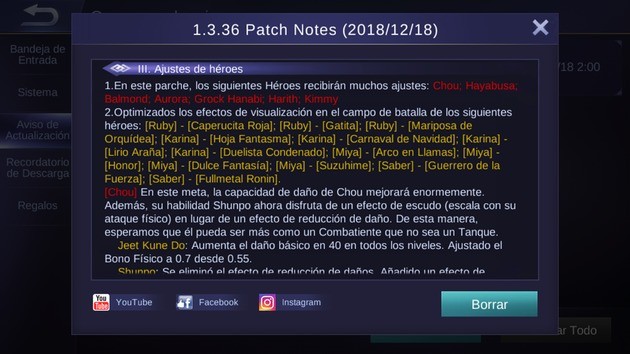 In every update, the developers of Mobile Legends change the details of the Heroes. More physical damage is added to a character's ability, cooldowns are increased, one Hero gets more mana than another, etc. It is important to read the notes to know if your favorite Heroes have changed or not.

They typically change as few as seven or eight characters per update, though sometimes they make bigger changes. The rest of the cast is not changed until future patches or is limited to minor visual tweaks. If one day they modify your characters, surely you will have to change the set of emblems and equipment. Pay attention to the notes! 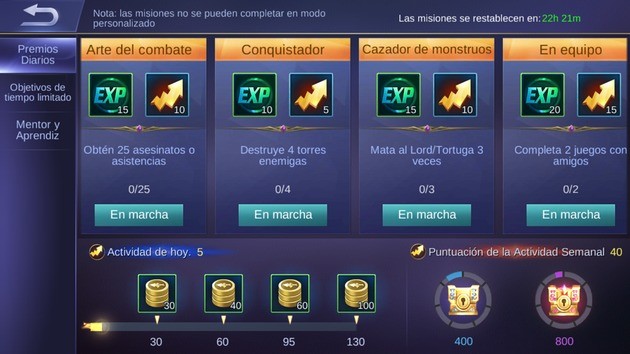 Finally, this last tip is not directly focused on improving the way you play, but it is useful to know about it. Completing daily missions grants prizes that will allow us to gain experience and earn coins. Also, if we reach a score of 400 and 800, we will get weekly chests.

Each chest can give us money, emblems, and test cards, among other things. We will also get shards to unlock Heroes and skins. Meeting the requirements of these missions will make the process explained in the first four points more bearable.

These are the nine tips that will help you grow and improve in Mobile Legends. You know what to do now: choose your favorite Heroes, and lead your team to victory!