It's time to recruit players on loan! In FIFA 19 Career mode, there are young players looking for an opportunity to show off their talent. Big teams often loan these players out to smaller teams, which is perfect if you need a boost in your own squad.

We have compiled 24 players who have good potential but do not have room to play in the big European teams. It is usual for it to be for salary reasons, an issue that can be easy to negotiate if you are looking for the perfect moment. Show them how much you love these players on your team, and they'll come without a second thought!

Find out now who these 24 loan players are!

This is the meaning of each position presented in the table above:

The most prominent loan players

The best player on the list is Loftus-Cheek (78), who plays for Chelsea. He is a pretty complete player, with Dribbling (82) and Short Passing (83) being two of his best attributes. He is a valuable midfielder for any team! Behind him is João Felix (78), a striker who is developing very well, with a potential of 89. If you can recruit him, do not hesitate to do so.

If what you are looking for exclusively is the potential of the player, pay attention! Even if they have a relatively low overall, Sofiane Diop, Angel Gomes, and Sergio Gomez all have a potential of 87. Not bad! However, the absolute stars are the aforementioned João Felix and Callum Hudson-Odoi, both with 89 potential. Also, Hudson-Odoi is one of the fastest with an Acceleration of 86 and Speed ​​of 84.

Another star player on the list is the Uruguayan Federico "Fede" Valverde (76), with a potential 88. He is from Real Madrid and his strong point is passing, as he has a Short Pass of 80 and a Long Pass of 83. becomes a powerful player for the central zone of the field, to prepare and start plays of all kinds.

Finally, another great player is Renato Sanches (75), who won the Golden Boy award in 2016. Despite this, he did not take place at FC Bayern for a long time, which is another great opportunity for your team. His Aggressiveness (90), Stamina (86), and Balance (90) attribute make him a spectacular midfielder. If the opportunity arises, take it!

Example team of players on loan

We show you an example that, although it is not made up of all the best players, it makes for a good formation. The strengths and weaknesses of each player interpenetrate, forming an interesting team. Of course, that doesn't mean the rest of the players on the list are bad choices! 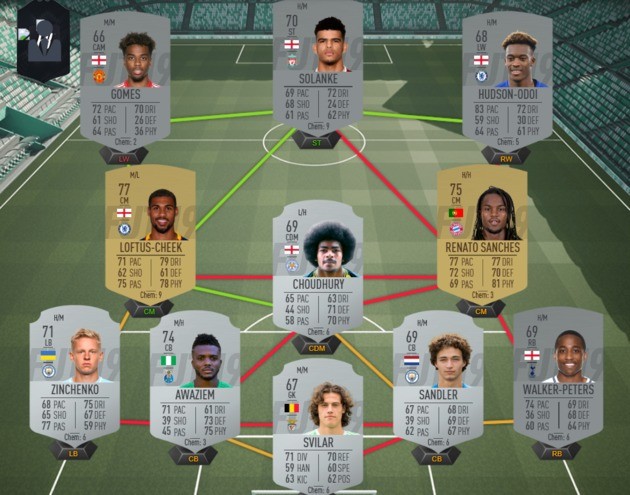 If you want to complete your roster of players in FIFA 19 Career mode, hire good and cheap players!